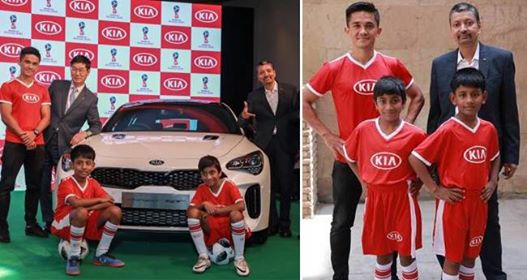 Cricket is widely popular in India. In fact, cricket matches are celebrated as festivals in India. Indian Premier League enjoys millions of viewers every year. A sport like Football was not given much importance in the country but now the things have changed. Football is slowly emerging as one of the popular sport in India after the Cricket. All thanks to stars like Indian skipper Sunil Chhetri. According to latest reports, two boys are selected as Official Match Ball Carriers from India. Ten-year-old Rishi Tej of Karnataka and 11-year-old Nathania John K of Tamil Nadu will be the two Official Match Ball Carriers (OMBC) at the upcoming FIFA World Cup in Russia. One of them will carry the match ball during Belgium vs Panama game while the other will get a chance to get onto the pitch before Brazil vs Costa Rica match.

Under the FIFA OMBC programme, 64 schools kids from different countries, including two from India, will get this once in a lifetime opportunity to not only walk alongside some of the world’s best players but to also watch a World Cup match.

India captain Sunil Chhetri conducted the trials in Gurgaon last month and had a tough time zeroing in on the two kids, who would be the country’s first OMBCs. As many as 1600 children participated in the programme, with 50 short-listed for the final selections “It was amazing to see so many talented young kids together, Chettri said. I thank Kia for giving this opportunity to the football-loving kids of our country,” said Sunil Chhetri in an interview. “It augurs well for the future of the sport”, he added.

It surely a great opportunity for young kids to walk along with World famous football stars and also watch a world cup match. The boys have surely made the country proud.