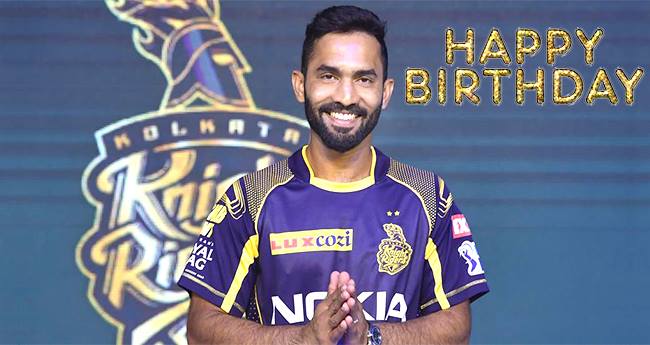 Today is the birthday of cricketer Dinesh Karthik who is well-known for his wicket keeping and batting skills. Karthik was born on 1 st of June 1985 in Chennai, Tamilnadu. The 33-year-old cricketer Karthik has proved himself many times as a batsman and good fielder. He started his career against England in the year 2004 as a wicket-keeper batsman.

In spite of his good wicket-keeping skills the selection board chose Mahendra Singh Dhoni as he was the talented batsman and wicketkeeper. Dinesh Karthik has played many international matches representing team India. He never gave up and also proved that the wicketkeeper can also bat when given chance. He was appointed as an opening batsman in test matches after the changes made in team India due to their poor performance in World cup 2007.  Karthik was also the captain of IPL cricket team ‘Kolkata Knight Riders’. Under his captaincy ‘Kolkata Knight Riders’ scored the third position in IPL 2018. His performance in a T-20 match is considered most spectacular as he scored straight 29 runs off 8 balls.

Quite a change from usually being in our sweaty clothes on a squash court or a cricket field ! All dressed up for #saudil2017! Wearing @dollyjstudio , styled by the beautiful @eshaamiin1 ❤❤

Karthik has been playing cricket since the age of 10 years old and spent two years in Kuwait. He was born in a Naidu family and has completed his schooling Fahaheel Al- Watanieh Indian Private School in Kuwait. His father was a first-class cricketer in Chennai and it was his father who taught him cricket in his early days.

Talking about his personal life Karthik is currently married to squash player Deepika Pallikal. His first marriage didn’t work as his first wife Nikita had an affair with Kartik’s team member Murali Vijay. Later on, cricketer Murali Vijay and Nikita got married. Deepika is Karthik’s childhood friend and the two got married on 18 August 2015 in Chennai. They tied the knot in both Hindu and Christian wedding style