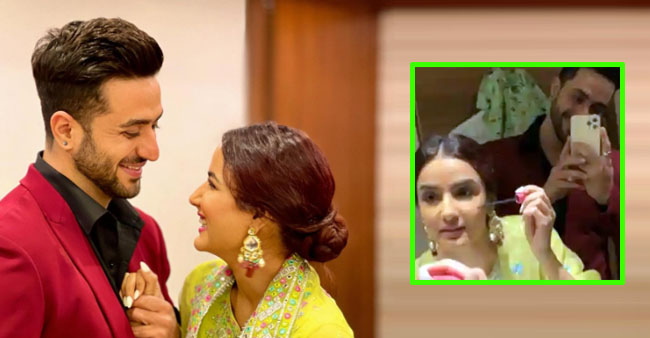 Actors Aly Goni and Jasmin Bhasin’s love story blossomed during their stint in the Bigg Boss house. The two were part of season 14 of the Salman Khan-hosted Bigg Boss. The audience went gaga seeing the duo’s affection for each other while inside the Bigg Boss house. However, they were concerned whether their relationship will last outside the house or not, but to everyone’s surprise, they are still going strong.

Meanwhile, Jasmin Bhasin and her beau Aly Goni are in the latter’s hometown, Jammu. Taking to his Instagram handle, the Naagin actor shared a video in which he has recorded Jasmin while she is doing her make-up.

In the video, Jasmin is sitting in front of the mirror while applying mascara. She has a cheek-to-cheek smile on her face as Aly records her. The romantic song Tarasti Hai Nigaahein is playing in the background. The adorable video is simply captioned with heart-eyes emoji.

It didn’t take much time for Jasmin to react to the video. She gushing dropped a few heart-eyes emoji in the comment section.

Aly and Jasmin have become the latest IT couple of the tinsel town. They never shy away from PDA and their social media handles are proof of the same.

A couple of days back, Aly shared a picture of him and Jasmin. In the picture, the latter is seen playfully hitting him. Sharing the picture, Aly quipped, “Sachai yeh hai ki.. Yeh sab isne mujhe maar maar ke sudhara hai (The fact is that she has set me straight with corporal punishment).”

Jasmin responded to the picture by commenting, “Aapko koi sudhaar sakta hai (Can anyone ever set you straight).” She accompanied it with a few laughing emojis to showcase the sarcasm.

Further, Bhasin added, “love you the way you are (sic).”

On Aly’s birthday, Jasmin dedicated a mushy Instagram post. The heartfelt note alongside the picture read, “Happy birthday my hero. This smile on my face in the picture is because of you and you always kept this smile on, since I met you (sic).”

The note further mentioned how much her life has changed ever since she met Aly and how thankful she is for everything.

Published by siddhi ajgoankar on 27 Feb 2021