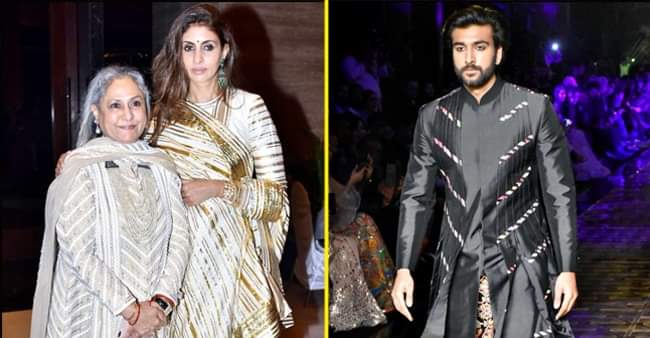 Recently, the designer duo Abu Jani Sandeep Khosla has completed 33 years in the fashion industry as a label. And they celebrated this iconic milestone in a very spectacular way. They showcased their creations in the best way possible. Every bit of the fashion showcase was delightful as Deepika Padukone turned as a showstopper.

The show was full of many eye-catching moments and talking about the best, it was perhaps when the veteran actress Jaya Bachchan came onto the ramp.

As Deepika walked onto the ramp and designers Abu Jani and Sandeep Khosla also walked with her, veteran actress Jaya Bachchan with her daughter Shweta Bachchan was seen cheering them up. Later, the excited Jaya Bachchan ran onto the ramp to hug a model who was standing right behind Deepika.

It was very much amusement to everyone present there, including Deepika, the designers and Shweta. They all looked on as she continued to bless the model. And the model was no one but Meezan Jaffery. It has been reported that the one-film-old actor is dating Navya Naveli Nanda, who is the daughter of Shweta and grand-daughter of veteran actress Jaya Bachchan.

Earlier this year, Meezan made his screen debut with the the film titled as Malaal . The fashion show then turned into a dance party as Deepika also got Shweta on stage and they exchanged pleasantries and Deepika also hugged Meezan and were seen all smiling.

Meezan was when asked about the relationship with Navya Naveli, he had said that there is no relationship. They are friends, and friends also have a relationship. It is not always a boyfriend and girlfriend thing. Also, it does not mean that they are dating just because they get papped outside the theatre leaving with friends.