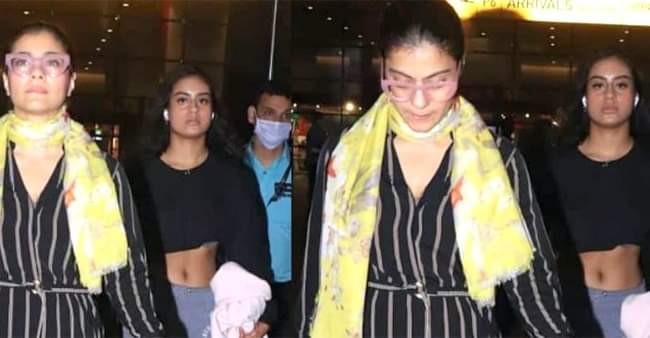 Bollywood actress Kajol, who is a doting mother to two kids- daughter Nysa and son Yug, makes striking appearances with them often. Be it airports, or vacay or local outing, Kajol is regularly spotted with her kids and loves to spend some quality time with them. Not just this but the popular actress also shares some adorable pictures and videos of her munchkins on her social media handles every now and then. Recently, the actress was spotted with her daughter Nysa Devgn at the airport and the mommy-daughter duo gave us major fashion goals.

In the pictures that are doing rounds on the internet, we can see Kajol sporting a black dress with white stripes which she teamed up with white tennis shoes and a scarf around her neck. Her daughter, on the other hand, looked uber gorgeous in a black crop top with grey track pants and flaunted her perfect abs.

Check out the lovely pictures of Bollywood actress Kajol with her daughter Nysa from the airport right here:

On the work front, Kajol was last seen in Om Raut’s Tanhaji starring Ajay Devgn in the lead role. Kajol was seen playing the role of Savitribai Malusare, the wife of Tanhaji Malusare in the film. Apart from Kajol and Ajay Devgn, the film also featured Saif Ali Khan in a pivotal role as he played the role of main antagonist Udaybhan Singh Rathore.

Talking about Nysa Devgn, she is currently completing her studies in Singapore and also lives there.