Kangana Ranaut Gets Trolled By Sargun Mehta, Karan Patel, Kushal Tandon As She Compares Herself To Meryl Streep 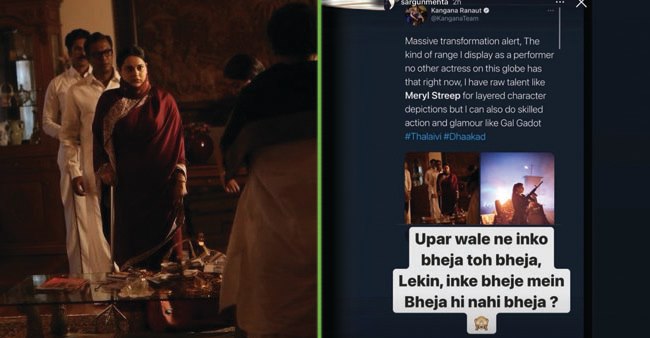 Published by siddhi ajgoankar on 11 Feb 2021

Actress Kangana Ranaut who is known for outspokenness often finds herself amid the avalanche of controversies and trolling for her statements. The actress’s Twitter handle is a place where one can find the root cause for most of the troubles in her life.

Yesterday, taking to her Twitter handle, Kangana Ranaut put out a tweet praising her own talent and she even compared herself to Hollywood actresses Meryl Streep and Gal Gadot. The tweet not only didn’t go well with the netizens but also a few Television celebs reacted to it.

Among the Television celebrities who trolled Kangana for her tweet include- Karan Patel, Kushal Tandon, and Sargun Mehta.

Kangana Ranaut’s tweet reads, “Massive transformation alert, The kind of range I display as a performer no other actress on this globe has that right now, I have raw talent like Meryl Streep for layered character depictions but I can also do skilled action and glamour like Gal Gadot.” She accompanied this tweet with the hashtags of her two upcoming movies Dhaakad and Thalaivi.

Massive transformation alert, The kind of range I display as a performer no other actress on this globe has that right now, I have raw talent like Meryl Streep for layered character depictions but I can also do skilled action and glamour like Gal Gadot #Thalaivi #Dhaakad pic.twitter.com/fnW3D20o6K

Speaking of Kangana Ranaut, she said that she will give up on her arrogance if anyone can show her an actress with more range and brilliance of craft than her.

Many Twitter users shunned down Kangana by saying that she is nowhere close to Meryl Streep. Giving a befitting reply to the netizen, the actress shared a series of pictures of herself dressed up in different avatars. It was to show the troll her acting proves.

I am open for debate if anyone can show me more range and brilliance of craft than me by any other actress on this planet I promise to give up my arrogance, until then I can surely afford the luxury of pride #Thalaivi #Dhaakad pic.twitter.com/0RXB1FcM43

On the work front, Kangana Ranaut has a few much-awaited ventures in her kitty. She is going to feature in films like Thalaivi, Dhaakad, and Tejas. All these films are female-oriented and Kangana is known for doing justice to her roles.

The actress is even training herself physically to nail her role in these movies with absolute perfection.

The release date of these films is not being announced yet by the makers.