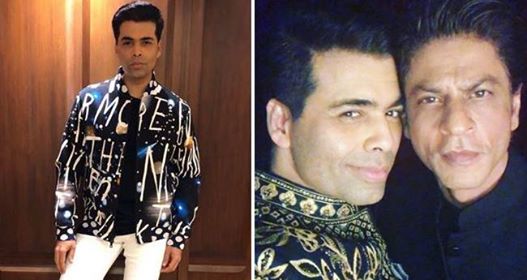 Shah Rukh Khan has been a very close friend of ace producer Karan Johar. They have been friends for decades now. According to the reports, Karan Johar just confirmed he is highly looking forward to making a film with Shah Rukh Khan again.

In an interview to a leading portal, while talking about Lust Stories, Karan revealed his most embarrassing moment till date. He revealed that he had an upset stomach when he was shooting for the song ‘Sooraj Hua Madham’.
Karan said, “So, I got the loosies one day in the middle of Egypt, while we were shooting Sooraj Huya Madham (Kabhie Khushi Kabhie Gham). I got a bad loose motions attack. And we were in this location where there were these limestone structures and I just had to go behind one of them.”

“I went very far and there was this other person who was having the similar problem and he was behind another limestone. And, we both stared at each other, we both knew we were hiding. And it was the most embarrassing emotion. He stared at me and I stared at him and we were both in squat positions and I was like, ‘I am gonna die’ because he found the limestone, as did I, and we both thought we won’t tell anyone. But, it was a very bad attack that I had. I couldn’t help it. The vanity van was two kilometres away. Yeah, so. It’s called Far Fara dessert, where we shot that part. And it has my remains for life now,” he added leaving Zoya, Anurag and Dibakar in splits.

According to reports, Karan has already figured out a script for friend Shah Rukh and he said in another interview, “Well, now that I am back from my birthday break (in London, UK), I will take all those decisions but I know one thing. Shah Rukh has been one of my best experiences in cinema ever and it’s something that I can’t wait to repeat,” says Karan.

We really hope this plan works out and we see them reunite after years.