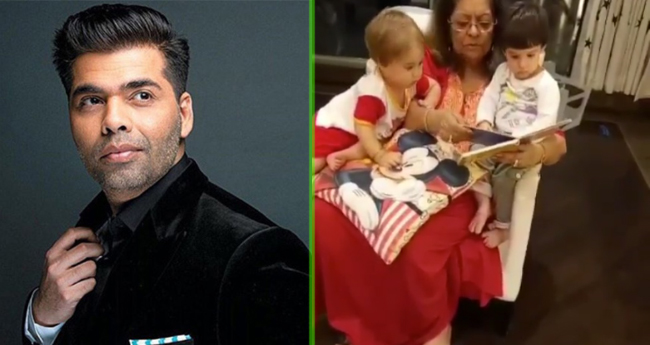 Karan Johar, everyone’s best friend in day to day life has been performing more than the duties of a filmmaker, producer and reality show judge and role of father to twins whom he named as Roohi Johar and Yash Johar. Karan performs well in every field but we are sure he is the doting father of the babies. He adores Yash and Roohi and no longer keeps both of them away from the social media to share this love with fans.

A video is rolling over the social media in which Karan’s mom Hiroo Johar is reading stories to her grandchildren. She is seen reading out stories set in 1935 and the two little ones are seen enjoying.

The video has been shared by Hiroo’s friend who captioned the video as, “Hirrrrrooooooo you convent educated Grand Mother reading stories to Yash and Roohi from the year 1935 !!!!!!!!!!!!!! Can’t stop laughing Yash’s reaction in the end is fabbbbbb he’s snatched the book and thrown it away”

Well, Karan embraced fatherhood and wrote on social media, “I feel enormously blessed to be a parent to these pieces of my heart who were welcomed into this world with the help of the marvels of medical science.” However, he can’t even get enough to thank universe and wrote, “I can’t thank the universe enough for giving my mother and me the most beautiful gift ever….Happy Birthday, Roohi and Yash….you are a blessing to us.”

I can’t thank the universe enough for giving my mother and me the most beautiful gift ever….Happy Birthday Roohi and Yash….you are a blessing to us❤️❤️

Yash and Roohi are premature babies and regarding that, the filmmaker wrote in his open letter, “My children were born two months premature and worryingly underweight. Like any person in this situation and on the brink of fatherhood, my heart sank. Knowing that there were complications with my babies birth owing to how soon it was, I was terrified. All I wanted to do was hold them and protect them but they needed to be in the NICU. It was painful to see how tiny they were…”