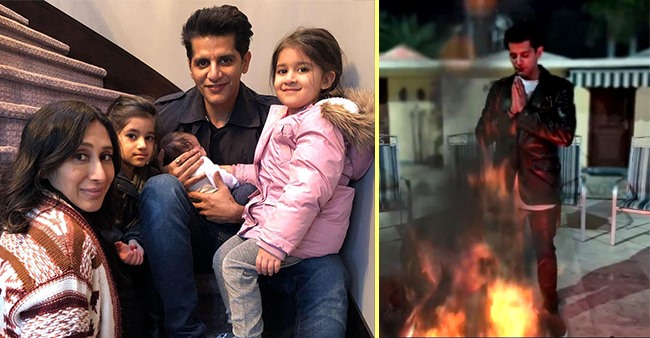 A month back, television actor Karanvir Bohra welcomed his third daughter with his wife Teejay Sidhu. The couple shared the good news with their fans and followers via social media. Their fans showered the little one with lots of blessings. The new parents of the tinsel town have even shared a glimpse of their baby girl on their respective social media handles.

Yesterday, the newborn baby celebrated her first Lohri. It happens to be the little angel’s first festival ever. Taking to his Instagram handle, Karanvir Bohra shared a family picture. In the picture, we can see the little one is cozily held by Karanvir while his wife Teejay and the other two daughters strike a pose for the camera.

Unfortunately, the actor couldn’t be around his family to celebrate the joyous occasion of Lohri. Expressing his sadness, the Shararat actor wrote, “The most painful feeling leaving your loved ones behind… not being with my little one on Lhori.”

Furthermore, he tagged his wife Teejay Sidhu and his twin daughter’s official Instagram handle. In the caption, the actor mentioned that his twin daughters have given the newborn an adorable nickname. Bella and Vienna call their baby sister ‘snowflake’. Karanvir then wished everyone a very happy Lohri.

Apart from Karanvir Bohra, his wife Teejay Sidhu also shared the pictures of the little one’s first Lohri. In the picture, the baby girl is cuddled up in warm red blanket napping on the couch. Teejay captioned it, “Baby’s first Lohri. But it’s actually a day like every other- beautiful.”

Poking fun in the caption, Teejay said that they haven’t yet finalized the name for their newborn daughter.

After seeing such adorable pictures, many of their fans are now eagerly waiting to know what the couple names their newborn daughter.