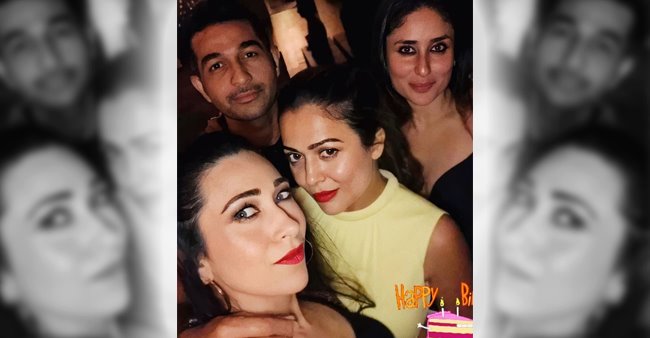 A few weeks ago, Kareena Kapoor Khan made her Instagram account and since then she is continuously posting updates. The Ki & Ka actress likes to be socially active. Earlier when she did not have an Instagram account, she said that she used to have unknown account from which she stalked other celebs. Kareena Kapoor Khan has been sharing selfies, pictures of her husband Saif Ali Khan, son Taimur and many more. Today, an unseen picture of the actress was seen in which she was posing with BFF Amrita Arora, her husband Shakeel Ladak and sister Karisma Kapoor.

Yesterday, Shakeel Ladak, Amrita Arora’s husband, celebrated his birthday. On this occasion, a picture was shared by Karisma Kapoor to wish him. In this picture, Kareena Kapoor Khan was looking like a diva. Her fans got a glimpse of her posing with Shakeel, Amrita and Lolo and as always she took the limelight in the photo. Kareena was seen wearing white jeans and a black top. She looked stunning.

On the professional front, Kareena was last in Good Newzz opposite Akshay Kumar. Other actors in the lead were Diljit Dosanjh and Kiara Advani. She will next be seen in Laal Singh Chaddha opposite Aamir Khan. Kareena and Aamir had flown to Punjab for the shooting of the same but had to return back as the shooting got canceled due to coronavirus. It is announced by the film bodies that no shooting will take place till the 31st of March 2020.

Recently, Kareena shared a picture on her Instagram profile in which Saif Ali Khan was seen reading a book. She captioned the picture saying, “Looks like he is ‘booked’ for the week… While I Instagram…”

A few pairs of Bollywood celebrities that you’ll probably find hard to believe that they are of the same age...

From Randeep Hooda to Vikram Bhatt, here are the men who Sushmita was reported to be dating...