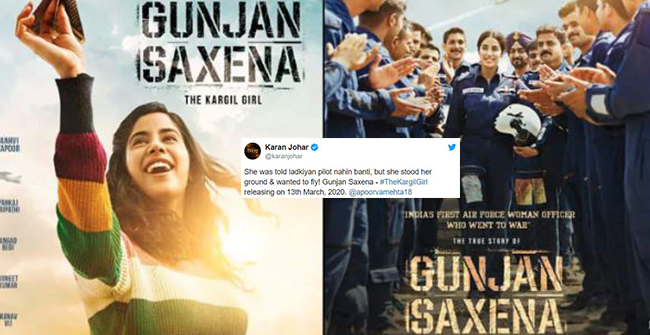 Recently, the first poster of the movie “Gunjan Saxena-The Kargil Girl” got unveiled, and the actress Janhvi Kapoor looked very much confident and full of life in the poster.

Jhanvi Kapoor will be seen donning the role of a fighter pilot and the recipient of the first female Shaurya Chakra in the movie.

In the poster, Janhvi Kapoor was seen wearing a colorful sweater and she was also holding a paper airplay in her hands. Her hair was also flowing freely along with the direction of the wind.

In another picture, which was shared by Karan Johan, Janhvi Kapoor was spotted in her uniform and walking in the middle of a crowd of men clapping for her.

The movie is directed by Sharan Sharma and also has other stars such as Pankaj Tripathi, Vineet Kumar Singh and Angad Bedi in major roles.

The movie is based on Gunjan Saxena, who was instrumental in transferring the injured soldiers during the Kargil war from the battle locations. In another picture that was shared on social media platform, Janhvi was seen hugging Pankaj Tripathi.

As per the reports, Janhvi had gained an extra 6 kg so as to fit into her role in the movie. Namrata Purohit, the trainer of Janhvi said that she was working out for six days in a week and the workouts lasted two to three hours on a daily basis.