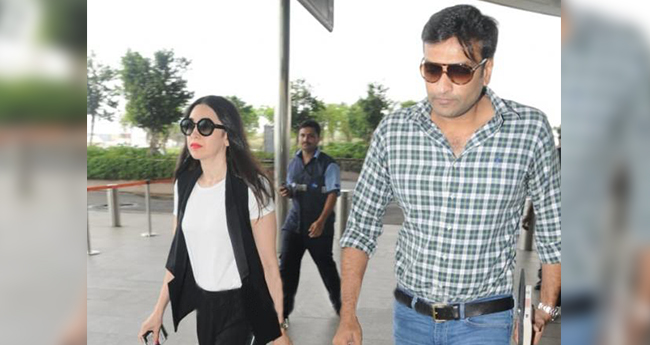 Actress Karisma Kapoor has no doubt contributed to Indian cinema with her unique performances in movies. But her personal life was not as good as her professional life. it has been rumored that this gorgeous lady is looking forward to start her new life. His alleged boyfriend Sandeep Toshniwal is often seen with her attending events and making public appearances. Recently they were spotted together at the airport. Although they never confirmed in public about their relationship but Sandeep’s divorce from his wife was finalized. This could be a sign of Lolo and Sandee to tie the knot.

Lolo knows how to slay it whether it’s a casual outfit or a traditional one. At the airport, she opted for a comfy look wearing track pants and a white T-shirt. Her beau Sandeep Toshniwal who is a businessman wore a checkered shirt with blue denim.

Karisma was earlier married to businessman Sunjay Kapur with whom she has two children named Samaira and Kiaan. Her current rumored boyfriend Sandeep Toshniwal is CEO of a pharmaceutical company. Both of them were spotted attending the court sessions with Saif Ali Khan for the black buck case. Well, Kapoor daughters are known for breaking stereotypes. Karisma’s younger sister Kareena married Saif which created headlines due to their age difference. Karisma’s father told in an interview “If she wants to get married, then she has my blessings. She is young and must be seeing him, I don’t know. I also see their photographs.” This confirmed that father Randhir is all happy with daughter’s happiness and had no objection if she marries Sandeep. Karisma was the highest paid actress in 90’s and gave many hit films including Raja Hindustani, Zubeidaa, Hum Saath Saath Hain, and Anari.

What do you have to say about Karisma’s airport look?