The wedding of Katrina Kaif and Vicky Kaushal has ruled all over the headlines in December 2021. The stars wanted to keep their wedding private but after completing their saat pheras they announced to the world about their Big Fat Indian wedding. They shared some beautiful posts of their wedding on their social media handles which left us with Aww moment. As now coup[le is painting town with their love it was recently when Katrina went to Indoor to spend some time with Hubby while shooting his film. But it seems that someone else has caught her attention before you start your imagination here we are talking about Varun Dhawan. The actor Recently Posted a picture where he was shirtless and he received a response from Katrina. 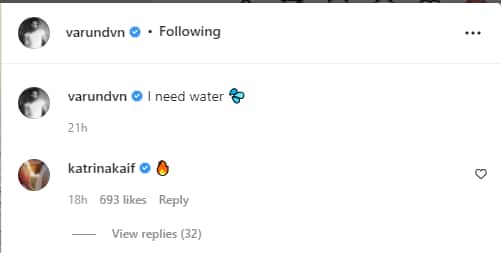 In Varun Dhawan’s recent post, we can see him flaunting his abs on the washboard of a yacht. Katrina Dropped a fire emoji in the comment section. Apart from her, Dino Morea, Aalim Hakim, and many others also commented on it. Well, well, Vicky Kaushal are you listening?

On the work front, Katrina next has Tiger 3 in her kitty. The shooting of the film that sees her alongside Salman Khan is on halt right now given the Coronavirus situation in India. Though the shooting of the film was going to begin by this month, reports suggest that it has now been delayed. This free time seems to have come as a blessing in disguise for Katrina Kaif as she is able to spend time with her hubby dearest.