After being laid off, techie starts selling vegetables; Sonu Sood offers her a job 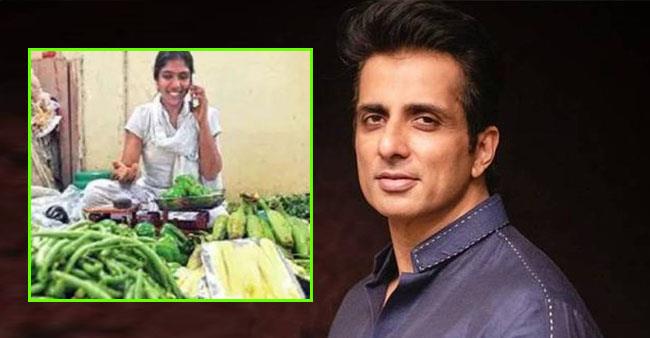 There are a few who believe in and preach the happiness one receives after giving something to the society. We sometimes cross paths with someone who believes in the gift of giving, and whenever we do, we always learn something special and golden. Recently, we all have noticed someone like that and he is none other than Sonu Sood. The actor Sonu Sood has been working so hard and everyday to make sure that he helps as many people as possible in this time of need. There’s not just one but several incidents that depict what a golden heart Sonu Sood has.

The man has already touched the lives of several thousand migrants as well as those whose finances and income were affected by the lockdown. He delivered a tractor to a farmer in Mahalrajupalle village as he couldn’t afford oxen for plowing. Sonu also opened a training school for ‘Warrior Aaji Maa’. He also offered financial help to the ‘Mountain Man’s’ family in Bihar. Sonu helped a milkman get his cows back after he sold them to pay for his son’s education. And these are just a few of his extraordinary works.

The latest news says that the actor has offered a job to a 26-year-old Hyderabad-based techie named Unadadi Sharada who lost her MNC job and was forced to sell vegetables so that she can help her family survive in these circumstances. The news says that she got up at 4 am, bought produce from the wholesale market, and subsequently sold them from a pavement in Srinagar colony. As soon as the news reached Sonu Sood, he made his officials call her and offer her a job.

My official met her.

In an interview, Unadadi Sharada said, “I have been closely following him [Sonu Sood Bhaiya], he has been helping people. When he called me, I was both surprised and happy.” Once again Sonu Sood has proved that if you really want to help someone, there’s always a way.

Published by Vidhutma Singhania on 29 Jul 2020

Amid Reports About Edgy Relationship, Sushant’s Sister Shweta Talks About His Close Relationship With Sisters...