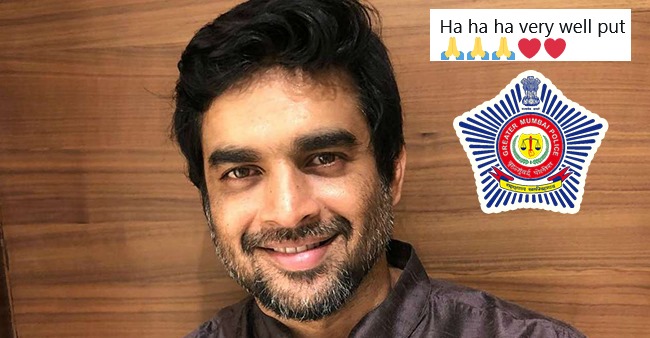 Amid the ongoing health crisis, Mumbai Police has been using its social media handles to urge citizens to stay indoors and follow the health safety protocols. The Mumbai Police’s social media account is full of rib-tickling memes giving away important messages. They are well-known for giving befitting and filmy replies to anyone who interacts with them.

Mumbai Police has been trying to make light of the rather horrific situation by adding a pinch of humuor. Recently, they have asked vehicle owners to put emergency or essential service stickers for easier traffic flow. The Police unit of Mumbai also got involved in a funny banter with a Twitter user who inquired what sticker should he use on his way to meet his girlfriend.

Replying to the Twitter user, Mumbai Police wrote back, “Distance makes the heart grow fonder (sic).” Their cheeky reply was appreciated by the netizens and they lauded their way to handle it with ease and dignity.

We understand it’s essential for you sir but unfortunately it doesn’t fall under our essentials or emergency categories!

P.S. We wish you lifetime together. This is just a phase. #StayHomeStaySafe https://t.co/5221kRAmHp

The RHTDM actor got a savage reply from Mumbai Police and the netizens are left in splits. The latter’s comment on the actor’s tweet reads, “We hope so too- it’s no ‘Rocketry’ after all (sic).”

We hope so too – it’s no ‘Rocketry’ after all. https://t.co/FL7EbGDckZ

Speaking of Mumbai Police’s ‘Rocketry’ reference, it is R Madhavan’s upcoming movie. The full name of the same is Rocketry: The Nambi Effect. It is a biographical drama based on the life of a former rocket scientist at the Indian Space Research Organisation (ISRO) by the name Nambi Narayanan.

The former ISRO rocket scientist was falsely charged with espionage and was also arrested back in 1994. Later, he was acquitted to Supreme Court in 1998. The film will be releasing in Tamil, Telugu, Kannada, and English. The makers have said that they will release the movie in the Summer of 2021.

Published by siddhi ajgoankar on 23 Apr 2021