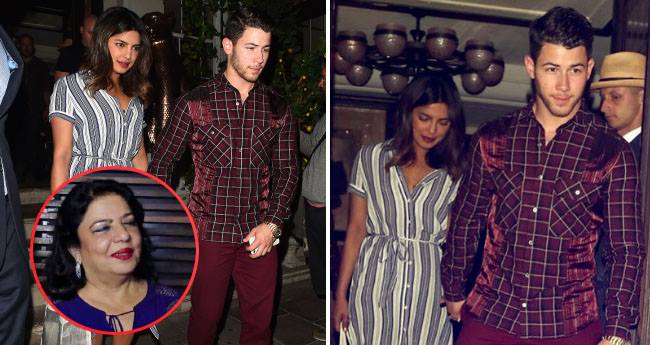 Priyanka and Nick are talk of the B’town when several times spotted together at events and occasions. Soon Priyanka and Nick’s love affair’s speculations are making the headlines and now the buzz of their marriage is doing around a while. Many said they are serious for each while others believe they are steady toward their relationship. Will they marry or not is a question that is on the lips of many.

Neither PC and Nick nor PC’s mother and Nick’s close source denied the talk about the marriage nor even accept. Till now, there are just rumours only. Well, seeing Nick and PC together, it seems that they are taking their relationship on another level day by day as they are knowing and spending time with each other. Priyanka even said on the trip to India, “It was really beautiful. He had a great time. That’s what he said. I think he really enjoyed it”.

Yesterday, at an event, the media got talking to PC’s mother, Madhu Chopra and asked her if the news about Priyanka tying the knot with Nick Jonas is true? She had a smile on her face and questioned back, “Aap kitne serious ho”, to which the journalist replied, “hum toh hai”, and she completed saying, “Aap serious ho toh hum bhi serious ho jaayenge”.

Here the statement of Madhu Chopra:

Well, Madhu Chopra has fuel up the speculations as she either denied the rumours also.

We would love to Priyanka Chopra and Nick Jonas as a married couple as they already won everyone’s heart with their pair.

Recently the couple was spotted last night in London for a dinner date holding hands where PC was seen in White and Grey striped dress and Nick in a Maroon check shirt. Such a cute pair, have a look at the pic:

Something is getting very serious as Nick and Priyanka already met each others’ close relatives. What do you think about the same?