Hordes of people congregated near a mosque in a busy slum zone in a power loom township in Thane region on May 20 evening following the rumors that the ace film star Salman Khan would be coming in order to provide help to the needy. At once, the Shanti Nagar police officials reached there to send people back to their homes and disperse the heavy rush that was not allowed during the on-going lockdown period. The police officials are in search of the source behind the rumor. 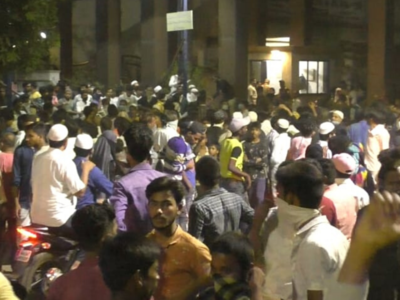 Senior Mamta Laurence Desouza of the Shanti Nagar police station told media people, “We are trying to locate who and how was the rumor started. We will be deciding the course of action only after the culprit/s are identified.” As per the police officials, all this took place in the Khandupada and Ansari Nagar area of Bhiwandi between 7.30 and 8 pm.

As in the past, this year too a lot of stalls have been placed close by the Auliya mosque in the locality where those doing communal charity work would allocate food, clothing and funds to the poor during the fasting month. The ritual has been taking place for the past many years.

Sources added that last evening was an occasion to remember deceased family members by offering flowers and lighting candles near their burial places. It is alleged that some people cashed in on the mood and to raise more crowds, spread the rumours about Salman Khan.