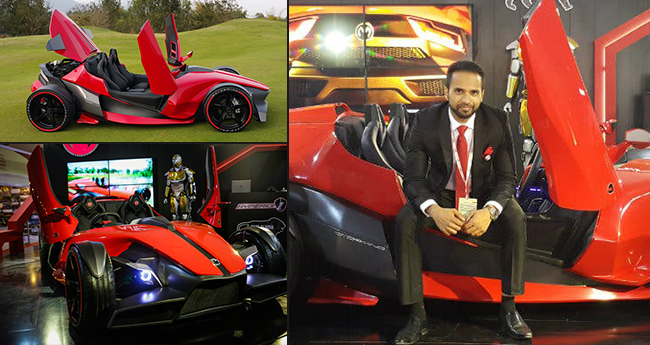 The energetic, dreamer and well-known 33-year-old Shahid Haq, CEO and Chief Designer of Motormind Automotive Designs said, “Whatever your goal is, your mind will find a way for it.”

The CEO and Chief Designer of Motormind Automotive Designs started dreaming big too early. When Shahid was just 13 years old, he had a dream of setting up a small car making use of a two-wheeler’s engine. Haq even made special attempts to set up one when he was just 15 years old, however, he did not witness much success. From that time, his fervour for fabricating a car energized his attempts on a vigilantly orchestrated trip towards attaining his vision.

Shahid Haq showcased a talent for sketching and painting at an early age and as a result, there was a natural progression in the direction of the automotive design. Shahid Haq was born in Kerala, but he brought up in Bengaluru. He completed his BE in Mechanical Engineering from R.V. College of Engineering, accompanied by MSc in Automotive Engineering. After that, he got a degree in Transportation Design from Coventry School of Art and Design, United Kingdom. Later, he started doing a job at a body store in Gaydon, Warwickshire.

Shahid said, “The embellishments at the workshop and how it looked was enough to spark a fire and fuelled my dreams of owning my own workshop and building my own car someday in the future.”

Shahid’s years of firmness, fervour as well as devoted labour concluded in Hyperion 1, a super vehicle, which came into existence in the Motormind garage, constructed by a squad of six people. The vehicle got displayed at Delhi Auto Expo in the year 2016, where it turned out to be the main attractions. He stated, “Hyperion 1 was built in my 3,000-sqft workshop with limited resources and a small team that I put together. My conservative approach applied here as well; everything was locally sourced, nothing was imported or outsourced, nor did I collaborate with anyone else to develop this. I had a team of engineering student interns to help me develop the CAD (computer-aided design) model of the chassis based on my requirements.”