Melania Rescued Trump From Being Embarrassed In front Of Royals 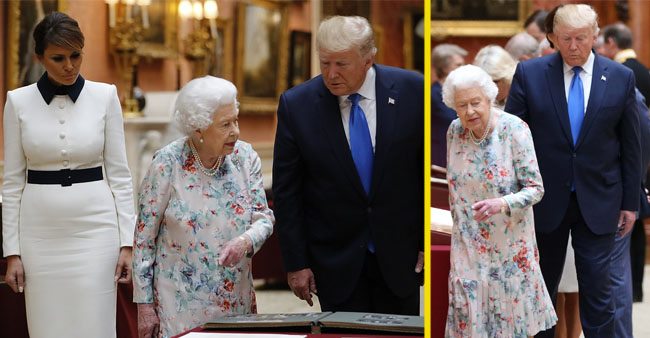 Wives always come for rescue their husbands. The same happened when wife of US President Donald Trump Melania Trump saved her husband from being embarrassed. She came forward for the rescue of her husband in front of biggies of royals. When US President failed to recognize a statue at Buckingham Palace that he himself had gifted to Queen Elizabeth Il last year.

As per the reports, at Buckingham Palace, the US President was shown a pewter horse which he gave as a gift to Queen Elizabeth in their meeting in July 2018. With shoeing the statue, he was asked whether he recognized it or not. Trump replied by saying “no” and failed to recognize his own gift.

#Repost @theroyalfamily ・・・ ‘Tonight we celebrate an alliance that has helped to ensure the safety and prosperity of both our peoples for decades, and which I believe will endure for many years to come.’ This evening, a State Banquet was held in the Ballroom at Buckingham Palace in honour of the State Visit of the President and Mrs Trump. In her speech at the banquet, The Queen spoke of the mutual aims and beliefs of both countries, saying, ‘Mr President, as we look to the future, I am confident that our common values and shared interests will continue to unite us.’ The Prince of Wales, The Duchess of Cornwall, The Duke and Duchess of Cambridge, The Duke of York and The Earl and Countess of Wessex also attended the banquet. 📸 Press Association

From being embarrassed in front of everyone, first Lady Melania rescued him by saying: “I think we gave that to the Queen.”

When Trump visited Windsor in July 2018, he had given the thoroughbred statue in polished pewter as a gift to the Queen. The incident which could put the US President in embarrassing situation happened when the Queen Elizabeth was showing the President and his wife Melania around an exhibition at the palace picture gallery of US artefacts on Monday.

#Repost @theroyalfamily ・・・ Today marks the start of the #USStateVisit. President Trump and Mrs. Melania Trump were met by The Prince of Wales and The Duchess of Cornwall on the lawn before being welcomed by The Queen on the West Terrace of Buckingham Palace. Upon arrival a Royal Salute was fired by The King’s Troop Royal Horse Artillery from Green Park (41 guns) and at the Tower of London by The Honourable Artillery Company (62 guns). The Guard of Honour, found by Nijmegen Company, Grenadier Guards, gave a Royal Salute before the US National Anthem, The Star-Spangled Banner, was played by the Band of the Regiment. The President @realdonaldtrump accompanied by The Prince of Wales, inspected the Guard of Honour watched by The Queen, the First Lady and The Duchess of Cornwall.

The items included a display of golfing memorabilia and a draft copy of a telegram from George VI to US General Dwight Eisenhower after the D-Day invasion of France. Previously, the US President was pictured giving the Queen an unusual handshake while meeting at the start of his state visit. When he was welcomed to the Palace, he appeared to grasp only the monarch’s fingers in his fist.

Trump was also shown the pewter horse that he’d given the Queen last year in his visit to Windsor. He was asked if he recognised it and he said “no”! Melania came to his rescue and said “I think we gave that to the Queen”. pic.twitter.com/SaIXvhUb7P

Social media users were quick to comment on the incident in a hilarious manner. One user wrote, “Exactly like all married couples worldwide. Wife picks gift that both give, husband pays no attention. I think every married couple knows this.”

Another user wrote, “Absurd the taxpayers of America are giving @RoyalFamily more stuff. They don’t need more stuff. We should be using our money for more important things. Insane.”

Irfan Pathan gives a befitting reply to Kangana Ranaut in a Twitter braw, blames her for ‘spreading hate’...

Bitcoin plunges 17% after Musk tweet that Bitcoins wont be accepted as payment at Tesla...

Madhya Pradesh government: Free education and Rs5,000 pension for children who lost their parents due to COVID...