To begin with, Milind looks just perfect in the throwback image that he shared on his personal Insta handle. Secondly, his companion Ankita Konwar’s remark on the special throwback post cracked us up.

Ankita Konwar, who took birth during the same year, shared a special comment on the post. She wrote, “And that’s exactly why I arrived. Hello lover.”

Milind responded to Ankita’s remark with some heart emojis and wrote: “All for you love.”

Actor Milind Soman took to Instagram to share a throwback picture from his modeling days back in 1991. The picture has received a lot of love, including from his wife Ankita Konwar.

The said pic was taken at the Ridge in Delhi, back in the year 1991. Wearing nothing, the dashing star is kneeling by the woods and he can be seen looking away from the camera.

A lot of admirers wrote also praise Milind. Some of the comments are – 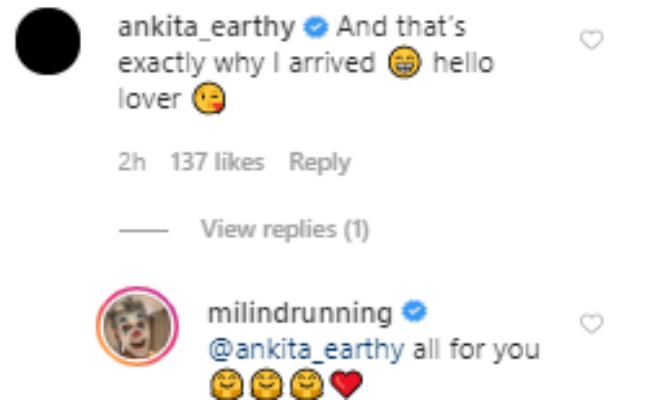 The image is evidence of how fit and fine the actor is. It seems that age is just a number for him.

The actor was a leading model in the nineties, having appeared in a lot of leading ads of the day. He has appeared in a number of films too.

Milind and Ankita are passionate about fitness and often share pictures and videos.

Childhood Pics Of Anushka & Virat Kohli Will Leave A Wide Smile On Your Face...

Nick gets excited as I talk about business plans over dinner, reveals Priyanka Chopra...