Mira Rajput fangirls over Shilpa Shetty in Chura Ke Dil Mera 2.0, praises her for her looks in the music video

Mira Rajput Kapoor, wife of actor Shahid Kapoor took to her Instagram stories to congratulate Shilpa Shetty Kundra for her new song Chura Ke Dil Mera 2.0 from her upcoming movie Hungama 2. Shilpa is back on the silver screen after a sabbatical of 14 years. Her last project was Life in a Metro in 2007.

Taking to her Instagram stories, Mira shared a photo of Meezan J and Shilpa Shetty from the song and wrote, “@TheShilpaShetty I’m a fan! Couldn’t take my eyes off you! How can someone look this hot and make it look fun as hell!”. This is the new version of the original Chura Ke Dil Mera song from the movie ‘Main Khiladi Tu Anari’ which starred Akshay Kumar and Shilpa Shetty in the lead roles. 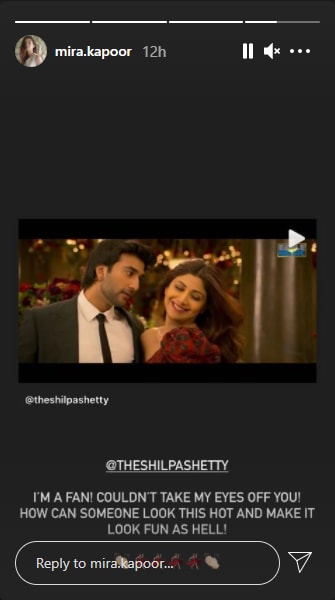 Shilpa Shetty had announced the release of her new song through Twitter where she tweeted, “Here it is, OLD wine in a NEW Bottle… An ode from all of us to late #SarojKhan ji…Thank you…”

Here it is, OLD wine in a NEW Bottle 💃
Missed the OG @akshaykumar, but #Filhaal, it’s time to steal @MeezaanJ’s heart 😉❤️#ChuraKeDilMera 2.0 song is out now!
An ode from all of us to late #SarojKhan ji…https://t.co/4TRH1uWAgJ#Hungama2@DisneyplusHSVIP #Venus pic.twitter.com/YQCC8TIfJr

Shilpa made a funny wordplay as she referred to Akshay Kumar’s newly released music video Filhall. Fans are extremely excited to see Shilpa back on the screen after 14 long years with Hungama 2.