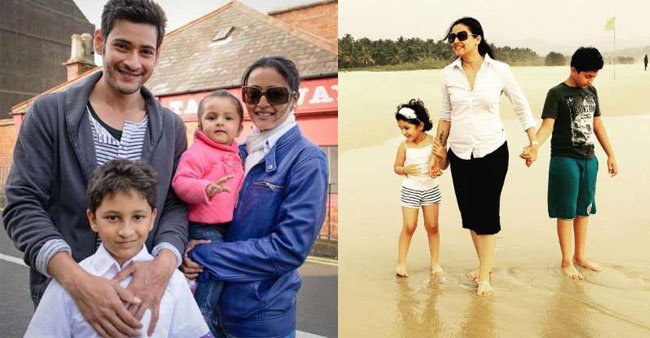 Mahesh Babu’s wife Namrata Shirodkar recently shared candid pictures alongside her hubby and kids. Originally, the actress met Mahesh on the sets of the film ‘Vamsi’ in the year 2000. Soon, they started dating each other and tied a knot together. Namrata and Mahesh Babu were blessed with the kids Gautam Krishna Gattamaneni and Sitara.

Big day tomorrow. I've seen your hard work & determination during #Maharshi's making to ensure the viewers have a surreal experience when they see Rishi's journey. It's time for the world to witness that!!! Good luck to you, my love @urstrulymahesh… ♥♥♥I'm sure everyone will love RISHI as much as I do.. #MaharshifromTomorrow #MaharshiDay

#nice to meet u ♥️♥️au revoir #frenchriviera .. until we meet again ♥️♥️

Every now and then, Mahesh Babu mentions how his wife is supportive of him in all his happy and tough times. Namrata is not just a homemaker but also takes care of his professional works like schedules his shoot, business endorsements and more. All these four make a cute and lovely family who resides in Hyderabad.

With my boy !! #exploringnice #familytime #gratitude

Mahesh Babu plans a vacation or trip soon after finishing his every film’s shoot alongside his family members. Mahesh is quite particular about looking after his family as a responsible husband and father. This couple has decided to bank their baby’s stem cells. They have started spreading awareness among the public regarding cord blood banking.

Mahesh has bagged hits with the films Murari, Athadu, Pokiri, Dookudu, Srimanthudu and the recently released Maharshi. Namrata is the granddaughter of the popular Marathi actress Meenakshi Shirodkar.

The actress made her debut in Bollywood with the film ‘Jab Pyaar Kisise Hota Hai’ featuring Salman Khan. Before entering into films, she has crowned Miss India in the year 1993. The actress received a nomination for ‘IIFA Best Supporting Actress Award’ for the film ‘Pukar’. Namrata and Mahesh often give us major couple goals.