The IPL 2021 has already generated some thrilling contests. In most of the matches so far, teams batting second have strived to successfully chase down totals and have gulped towards the end of their chase. A similar circumstance was glimpsed during the Mumbai Indians (MI) vs Kolkata Knight Riders (KKR) match where the defending champions snatched victory from the jaws of setback. 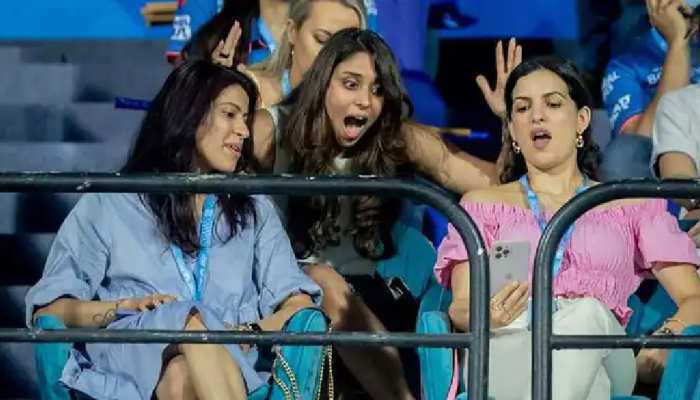 Eoin Morgan and his men required 31 runs from as numerous balls and with 7 wickets in hand, it should have been a simple hunt. Nonetheless, Rohit once again indicated why is he the most successful IPL captain as his bowlers bagged wickets at formal duration towards the fag end of the innings as MI gained a victory by 10 runs.

The families of the MI players were applauding from the stands and the environment was uneasy as Ritika Sajdeh, Natasa Stankovic and Pankhuri Sharma were on their toes towards the end overs. In a picture that went viral on social media, Ritika can be seen surprised looking at Natasa’s screen.

The cricket fans were left mysterious as to what directed to such a reaction from the wife of the MI skipper. Mumbai Indians revealed the suspense on social media where they posted the similar image and also unraveled the mystery for the fans.

Mumbai Indians, while sharing the pic, inquired fans to swipe left to find out what amazed the trio. Doing so disclosed a pic of Rohit Sharma in action during the match. The Mumbai Indians captain is married to Ritika Sajdeh and the two have a daughter named Samaira.

Since being posted yesterday, the picture has collected over 5 lakh ‘likes’ and hundreds.
“Always great to watch Ro-Hit on the field,” wrote one Instagram user. “Her reaction and his bowling,” another said.

Mumbai Indians won against KKR by 10 runs gratitudes to a spirited bowling achievement from the Rohit Sharma-led side. Krunal Pandya bowled economically and just gave 13 runs in his four overs and picked the wicket of Shakib Al Hasan. Rahul Chahar returned with the figures of 4-27 in his four overs and he was named the Player of the Match.