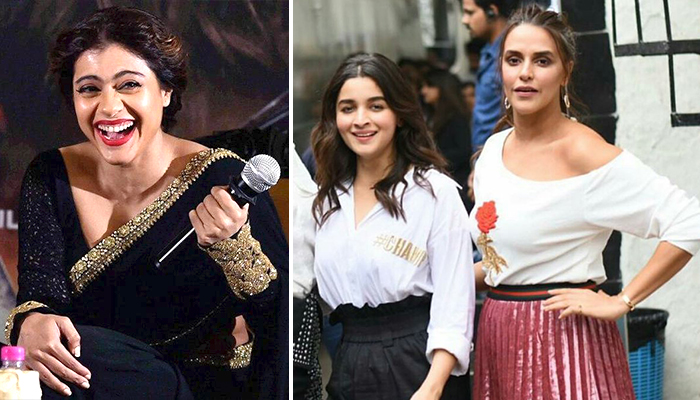 In this era, the film industry’s leading ladies are cutting short the stereotypes by doing what they want, not what society wants. For instance, Kajol in her 40s is prepping for the upcoming flick Helicopter Eela while Neha Dhupia being third-trimester pregnant is working hard without any break and came up with the 3rd season of her talk show, No Filter Neha.

Looking forward to a Capital day ….. 👍

In Helicopter Eela, Neha Dhupia will also be seen playing a major role. After Neha and hubby, Angad Bedi announced their pregnancy through a social media post, Mom-to-be Neha shared in an interview, “I want absolutely no time off”. And thus, Neha is back with the third season of her bang-on show, No Filter Neha. The show boasts of many celebrities going all candid about competitors and their personal lives. One of the guests on Neha’s show is, Bollywood’s Senorita, Kajol.

Earlier sharing a couple of pictures from the chat show’s shoot, the to-be mommy captioned it as, “She ain’t going anywhere now!! Finally got the elusive @kajol on #NoFilterNeha and we promise she’s worth the wait! @saavn #nofilternehaseason3.”

She ain’t going anywhere now!! 🔐 Finally got the elusive @kajol on #NoFilterNeha and we promise she’s worth the wait! @saavn #nofilternehaseason3 📸 @rjdeigg

In the new trailer of Neha Dhupia’s show which she posted on her Instagram handle, it is seen that in one segment Kajol speaking her heart out and unwillingly in a moment of slip of tongue, Kajol calls Alia Bhatt as Alia Kapoor and we started wondering if Kajol just confirmed their relationship which Alia-Ranbir never accepted. While Neha hooted on this hilarious take. Here’s the trailer, have a look at it:

#NoFilterneha is Back to keep you laughing with shocking! Crazy! And hysterical guests. Starts tomorrow on @saavn with a very special guest. Co produced by @wearebiggirl … a brand new episode dropping on @saavn tonight ! 💥🔥☄️

Talking about Ralia’s relationship, Ranbir’s father, Rishi Kapoor indirectly dropped hints on Alia and Ranbir’s budding relationship when he said, “Jo hai woh hai, sabko pata hai. I don’t need to say anything more.” The Mulk actor also feels that “It is high time he got married. I settled down when I was 27, Ranbir is 35. So he should think about marriage. He can marry anyone of his choice; we don’t have any objection to it. I want to spend time with my grandchildren before I am gone.”

He further shared, “[Be it] Ranbir or his contemporaries, actors have blinkers on and are focused on their work. The only women they meet are the actresses. They don’t socialise as much; that is the flipside of life in the movies.”