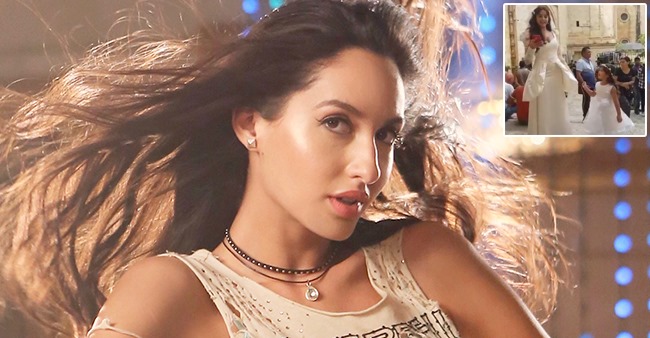 Bigg Boss participant Nora Fatehi rose to fame after appearing in the hit song Dilbar from Satyameva Jayate. Since, then there is no looking back for the actress. Her sensual dance moves helped the song top the chart busters. Also, the song added to list of the most searched songs of the year with two billion viewership. After Dilbar, she collaborated with independent artists for a new version of Dilbar. Seeing the talent of Nora, filmmaker of Bharat casted her in the film. She is seen alongside Salman Khan and Katrina Kaif for a small role. She plays the role of Sophia in the film.

Well, a little fan of Nora requested her to shake a leg with her on her hit song Dilbar on the set of Bharat. Nora accepted the demand of the little girl with joy and danced with her. Nora is seen shaking a leg in all white ensemble and the toddler looked ditto like Nora while dancing.

Watch the video of Nora dancing to the tunes of Dilbar:

Speaking to a portal, Nora told that “‘Dilbar’ is very close to me. It was a turning point in my career. I was traveling a lot during the release of ‘Dilbar’ to various countries and the song would be played at random places like lounges, coffee shops, streets and I realised the song had reached levels that were beyond India. They may not know the language, but they were enjoying it. When I came back to India for the promotional activity of the song, it struck me that we should do an Arabic version of the song because I come from Arabic North African background and my fans from that region follow my work loyally. I thought this was the perfect time to give the love back to them with something that they can connect more due to the same language. I also look at it in a way that it is a proud moment for the nation too because they have a Hindi song which has been remade in another language now.”

After Bharat, Nora will be next seen in Shraddha Kapoor and Varun Dhawan-starrer Street Dancer 3D.