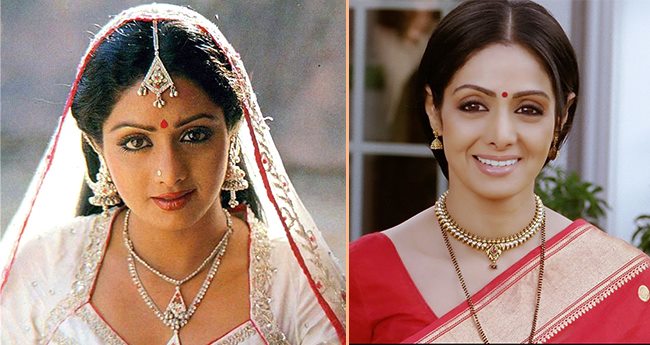 The fans are remembering Bollywood legend Sridevi today as it is her 55th Birth anniversary. The actress left for her heavenly abode in February this year, leaving the family, friends, and fans in grief. Last year, she had a star-stunned bash on her birthday, and this year, we are just left with the old memories. The 54-year-old actress had given 50 years of her life to cinema. She started working in the films at the age of four and had given about 300 films.

She was not just a timeless beauty but a great actress as well who proved her talent in Hindi, Telegu, Tamil, Malayalam, and Kannada films. On the special occasion, let’s recall her 7 most iconic films. The 1983 film Himmatwala gave a new Jodi to Bollywood and it was Sridevi and Jitendra who went on to work in 16 films together out of which 11 were blockbusters. At the time, they were considered as the most bankable jodi and fans loved them too. Sridevi is still remembered for her role in Nagina in which she played an ‘Icchadari Naagin’. The film also starred Rishi Kapoor. In the film, Sridevi performed on the song ‘Mai Teri Dushman’ which became very popular that time. Sridevi and Anil Kpaoor had worked in several films together and most of which were produced by Boney Kapoor. One such film was Mr. India. Not only the film was a superhit, but Sridevi’s song ‘Hawa Hawai’ is still one of the most popular numbers. Sridevi played a double role in this film. She performed a rain dance in the film on the song ‘Na Jaane kahan se aayi h’ which is remembered till date. 2014 film English Vinglish was the comeback film of Sridevi after almost a decade. She played the role of a housewife whose struggle is to get respected by her own family. The film won the hearts of fans as well as critics. Nobody had thought that MOM would be her last film. The film was about the struggle of a mother to get justice for her daughter. The film also starred Akshay Khanna.

Which were your favourite films of Sridevi? Tell us in the comment section!