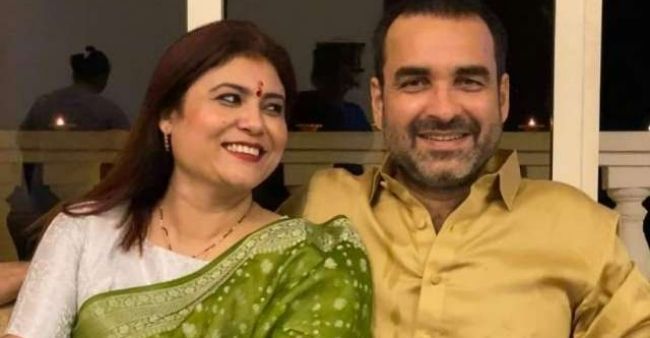 Pankaj Tripathi on Sunday shares a series of pictures with wife Mridula to mark their wedding anniversary. One of the photos, which appears to date back to the courtship days, shows the couple smiling while posing. In another, Pankaj and Mridula exchange garlands during their marriage. There are some photos of Mridula and also a recent photo of the couple. The actor titled his Instagram post, “17 saal hue aaj parinay sootra me.Is sukhad yatra ki kuch yaadein, dhanyawaad​​(It’s been 17 years since we were married. Sharing some memories of the beautiful journey, thank you). “Pankaj and Mridula have a daughter together.

Director Anurag Kashyap was among the first to comment on the post and wrote, “Waah, badhai (Wow, congratulations).” Actors Archana Puran Singh, Jatin Sarna, and Siddhant Chaturvedi among many others also showered love on the couple. Pankaj often said that during his troubled times, it was Mridula who took care of their household expenses.

He also appreciated her for the support she always gave. Mridula is a teacher. In an interview with a news portal in 2020, Pankaj said, “I had decided at the age of 10 that I did not want to take any dowry and would go for love marriage.” He also revealed that it was love at first sight for him, even though he knew nothing about her at the time. He saw her at his sister’s wedding and decided he would spend the rest of his life with the girl, even without knowing the girl’s name.

On the work front, Pankaj has some big plans planned including Oh My God 2, Bachchan Pandey, and Criminal Justice season 3.