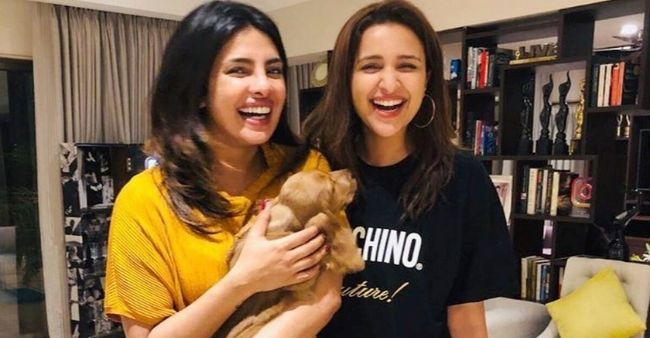 It is not news that Parineeti Chopra and Priyanka Chopra are first cousins and that fans and media often compare the sisters with each other. While the sisters share a cordial relationship, media often assumes otherwise and draws comparisons.

Parineeti clapped back by saying “Parineeti is just doing what? What do you mean by this? Priyanka’s career started in 2000 with her Miss World win. Now it’s 2017 and I  started in 2012! Haaye Raam.” She laughed.

Parineeti further said that we (Ayushmann and herself) are just 6 films old while Priyanka already has more than 50 films in her kitty. “There is just no comparison. It is like comparing the Khans with a person who is just stepping in. It is an invalid question for me since I don’t see any comparison between us.” She added that she just always watched Priyanka on the television and that she never even imagined working in the same industry as her at the same time.

It should be noted that it was Priyanka who helped Parineeti secure her first job in marketing with Yash Raj Films almost 10 years ago.

Recently Parineeti had 3 back to back releases and when asked about Priyanka’s reaction she said she always supports and advises me. After watching the films she told me that she is proud of me and that is a big deal for me!