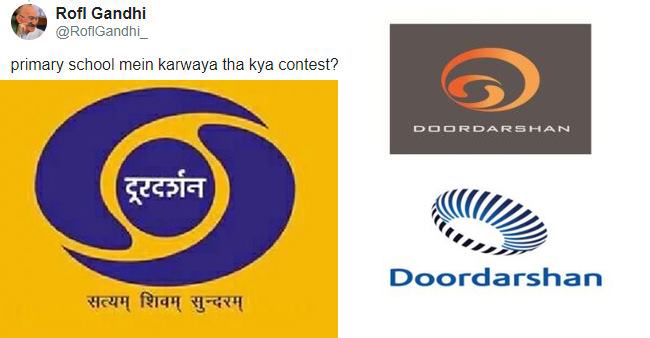 The kids who grew up in the 90s’ have grown up watching shows like Malgudi Days, Shaktiman, Tu Tu Main Main, and Dekh Bhai Dekh on television channel, Doordarshan. The channel will always have a special place in our hearts. The odd music and the circular logo are still loved by people. So, it is understandable that if someone messes with it, then people will protest against it.

Doordarshan Logo Contest – Here are the top 5 logo designs selected out of more than 10,000 entries. pic.twitter.com/qV8Ni2Zkj8

According to reports, Doordarshan announced a competition back in 2017 regarding the designing of a logo for the channel. It got almost 1000 entries. The channel’s aim is to drive the audience back. In an official statement released by the channel it was said, “The new logo while recalling the strong nostalgia associated with the DD brand, should reflect the aspirations of new India.”

Recently, the five logos that have been shortlisted from the entries were posted on the official Twitter handle of Prasar Bharati. The winner will get INR 1 lakh for the work they have done on designing. Though, some people are not at all happy with the new shortlisted logo designs. There are several angry tweets on microblogging platform saying that they are disappointed and think that the old one is far better.

Fire the selection committee . This is worse than clipart!

One of the Twitter users wrote, “Nothing even closer to the #iconiclogo of @ddnational which we’re accustomed since childhood days. Doordarshan’s Iconic Logo Will Soon Be History.” Whereas, one user asked to fire the design team who selected the logos. He wrote, “These look really awful. Out of 10000 entries, if these are the 5 top logo designs selected, then you need to change the team who selected these awful designs and not the logo! #doordarshan.”

After seeing this – the old one looks fabulous. Please let it be 🙏🏼

The original logo was designed by Devashis Bhattacharyya, a student of National Institute of Design in 1976. The logo represented human eye.