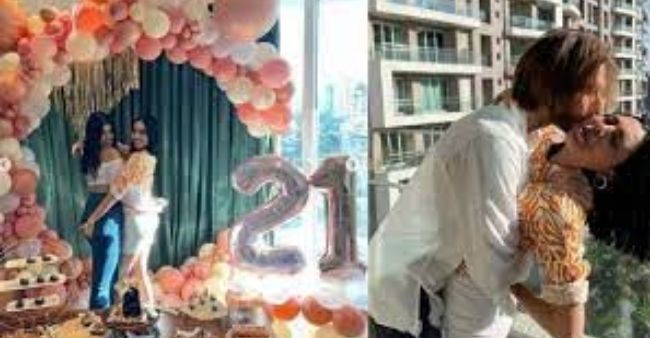 Director Anurag Kashyap’s daughter, Aaliyah Kashyap, recently turned 21. To celebrate the day, the star, who is an avid user of social media, took her fans to her big birthday party at home with close friends and relatives. She shared several photos of her house adorned with birthday balloons and banners all over the place.

It also included a number of desserts, including a large decorated cake, macaroons, cinnamon rolls, and more, placed on small tables with a sign reading “Aaliyah’s 21st”. In one of the stills, the birthday girl’s boyfriend Shane Gregoire is seen planting a sweet kiss on the star kid, while other photos show Aaliyah happily posing with her friends, including Imtiaz Ali’s Ida Ali.

In her statement she said, Thank you to everyone who made my day so special despite the current circumstances. thanks to @rakshithaharimurthy @ risston.co for making my little brunch so special. Meanwhile, it appears Aaliyah’s best friend and Sridevi Boney Kapoor’s youngest daughter Khushi Kapoor did not attend the birthday party this year.

However, Khushi wished on her social media for a taste of their virtual celebration during the midnight cake cutting ceremony saying, “Happy birthday, my pumpkin.” While Khushi will soon mark her Bollywood debut, it was Aaliyah who decided not to join the league as she continues to be a social media influencer. Speaking of which, she once revealed that she didn’t grew up with Bollywood glamor.

Priyanka Chopra recalls being wondering if wearing mangalsutra is ‘too patriarchal’...