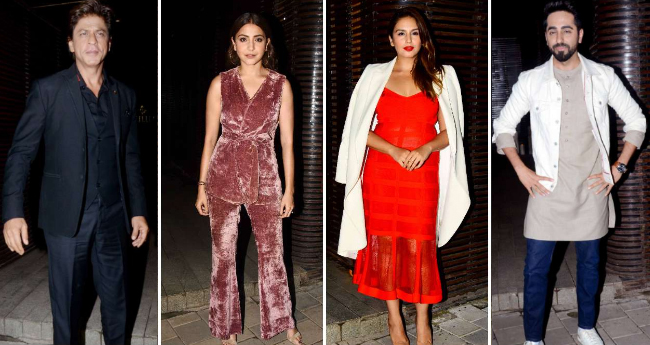 Aanand L Rai is one of the most well-known personalities of Bollywood. The ace director has worked with some of the biggest Bollywood stars in the film industry. Shah Rukh Khan, Kangana Ranaut, Abhishek Bachchan, Taapsee Pannu, Anushka Sharma, Katrina Kaif among others.

The film director turned 48 recently on 28th June. Well, to mark this happy occasion, a grand party was organized. The party was one happening occasion as it was a star-studded one with many biggies marking their presence to wish the ace film personality. Some of the Bollywood divas were seen in all colorful outfits. Anushka looked soft and subtle in a purple velvet pantsuit, Huma looked smoking hot in a red dress. Bhumi looked sexy in a brown outfit and Swara sported a cool casual look. The film stars before and after attending the bash happily posed for the shutterbugs who was waiting outside the venue.

Aanand L Rai was seen addressing and posing for the media with his family.

Seems the birthday party dress code was kind of black and we saw a lot of celebs flaunting their black outfits. While men looked dapper in black shirts, the actresses flaunted their little LBDs looking smoking hot. Also present at the occasion were a host of other stars, who have all been part of films produced by Rai’s production company, Colour Yellow Productions.

On the work front, Mr. Rai is currently filming with SRK, Anushka, and Katrina for Zero which is slated for December 2018 release.