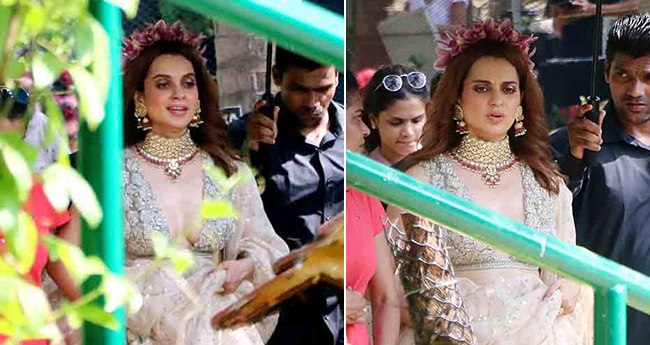 Kangana Ranaut,l the drama queen of Industry who fiercely speaks her mind out was spotted in the city yesterday on a shoot location. Well, we are not sure she was shooting for his forthcoming film or it was for an ad shoot.

She caught in a beautiful blouse with a deep neck which she paired with a lehenga and embellished dupatta but her floral hairband steals the entire the attraction.Well, Kangana will be seen in two films first she will come alongside Rajkumar Rao in Mental Hai Kya while she also shooting for Manikarnika: The Queen Of Jhansi in which she will be seen playing the role of Rani Laxmi Bai.

#KanganaRanaut watches #Raazi and is all praises for @meghnagulzar & @aliaabhatt

However, after the poster launch of the film, she said, “I’m so blessed to be here. With the blessings of Lord Shiva, we have launched it here. After coming on board for this project, I feel like I’ve achieved something very big in my life.”

The film is believed to have something controversial and regarding that once the actor clarified, “There is nothing controversial in Manikarnika. It’s really bad on our part to even think about creating such controversies for a woman who gave a tough fight to the British rulers while fighting alone for the country’s sake.”

Kamal Jain, the producer of the film said, “As responsible filmmakers, we have taken utmost care while portraying Rani Laxmibai’s character and have consulted historians and scholars. Rani Laxmibai was a freedom fighter and one of the most respected leaders our country has seen. She is a symbol of valour and the film’s story depicts the same.”