Pics: Neha-Angad Walk Hand-In-Hand At The Airport, Leave For US For Honeymoon 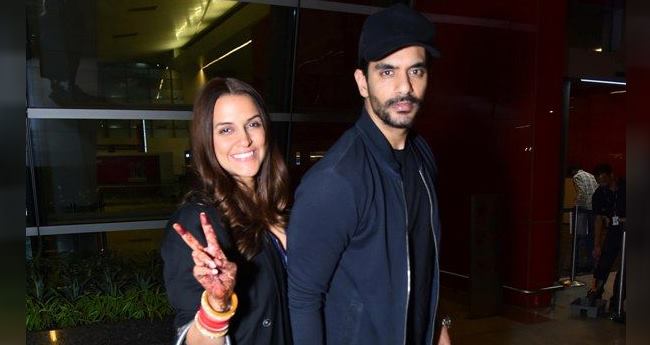 Neha Dhupia and Angad Bedi’s marriage came as a huge surprise not just for their fans but also for the Bollywood celebs. The couple got married in a hush-hush ceremony in Delhi yesterday and announced about it on the social media. The beautiful gurudwara pics went viral on the internet and congratulatory wishes started pouring in for the newlyweds in no time.

And now, yesterday, the newlyweds were spotted at the airport walking hand-in-hand. Both were all smiles for the shutterbugs as they made their way to the airport.

Neha looked beautiful in casual comfy clothes and the red chooda made her look even more beautiful. Angad was also seen in cool casuals. Angad and Neha have left for America to attend an event and the couple will be extending their stay over their to spend some quality time together. They will be back next week to host a grand reception for their industry pals.

A source revealed, “They are planning a Mumbai reception. They will host a party to make up for not having invited us to the wedding. But, they are in most likelihood, leaving for the US tonight for a charity event, and will be back next week.”