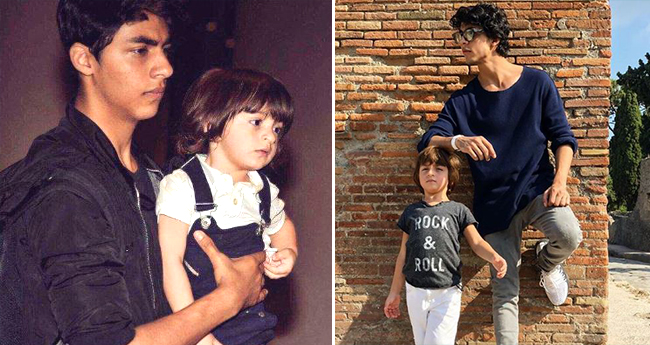 Shah Rukh Khan is the one who can kick off our bad moods in no time. Like him, his son’s are doing the same with their ultimate swag and charm. Right now SRK in enjoying his vacation in Spain with wife Gauri Khan and kids Suhana, Aryan, AbRam. The picture from their vacation is going viral on the internet and it seems fans are totally consumed with them. Among, the picture we got a new one in which Aryan is properly behaving like an elder brother who overpowers his little brother AbRam.

Aryan, who disappears from Instagram as in past 7 months he didn’t post any pic. But, now after so long, he is back and the first image after his comeback he posted is with brother AbRam. Aryan took to his official Instagram account and shared a photo with the caption read as “Nobody lays a hand on my brother.”

Nobody lays a hand on my brother.

Well, not only Aryan but dad Shah Rukh to mom Gauri everyone keeps sharing the pictures from their vacation. Check out those pictures here:

#Suhana kissing her father aka King Khan and the caption read as ‘Sunkissed.’

#Gauri took to her Instagram and shared a picture of the trio with the caption: Best a woman can get… soaking the sun with my boys in Barcelona.

Earlier SRK told how his children felt awkward because of their father’s fame at the starting, “I think, initially, the kids started feeling awkward with all the paraphernalia, the cars. Every time I go out in a public place, I don’t take them with me. My wife doesn’t come, my children don’t come, I go to functions alone or I go to post they have gone. So they don’t enter with me because with all due respect I’m a star and I expect everyone to rush on to me. I don’t expect that to happen to my family. So they have understood it, they don’t go. There is hardly a place maybe a special occasion when we have to come together. Otherwise we never travel together to even a private dinner. Some adjustments have to be made. One of them was that I sent them abroad to study. Not because of the scrutiny but because they were feeling awkward from all the attention they had from their own staff.”