Pics: Suhana Khan Is Having Gala Time With Gauri Khan In London And It Is Adorable 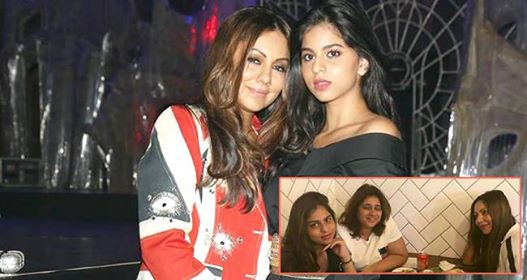 Suhana Khan is among top names when it comes to young talents of Bollywood. Suhana, just like her father, is a smart and talented actor. Her video from a school play was doing rounds on the internet a few days ago and she created a buzz about herself on the social media with her acting.

Suhana turned 18 just recently on May 22 and her father was surely happy about it and also a party was organised for the same.

Suhana is recently in London with her mother Gauri Khan and it seems they are having a gala time together. Have a look at some pictures of beautiful mother-daughter duo doing rounds on social media.

Suhana’s pictures have always gone viral and people are sure that she is turning a diva from a little, shy girl.

If reports are to be believed, Suhana will soon make her magazine cover debut with a popular magazine. The shoot will start soon and the magazine edition will be published in upcoming months of the year.

“Suhana is shooting for a magazine. I don’t want to reveal the name but that’s the most exciting thing I am looking forward to this year,” an excited Gauri Khan said in an interview.

We’re backstage at the #HHOF18 with your favourite stars and some of the nation’s finest super achievers… Stay tuned for LIVE & EXCLUSIVE updates! #HHOF18 #HELLOHallOfFame #StayTuned #LiveAndExclusive @gaurikhan

She is so beautiful 😍 Suhana could be a Model 😻💕

However, Shah Rukh Khan has said in an interview that his children need to complete their education first.

“Suhana wants to be an actress. I see that zeal in her. She’s extremely good at stageI’ve seen her performances. She’s admitedly a cinema fan and wants to be in the industry. but my point is simple – you need to complete your education before doing anything. That’s the only thing I have told my children.”

Suhana with her Daddy 😻💕

However, he added that Suhana needs to be prepared for the pay gaps that female actors go through:

“She can be an actor if she has the passion and guts to work five times harder than me and get paid 10 times less than I do, if times don’t change for women actors. I want her to experience what my female co-stars have gone through. My daughter will be an actor like them and I want to feel the pain.”

It would be exciting to see young diva on the big screen – after all, she is Shah Rukh Khan’s daughter.