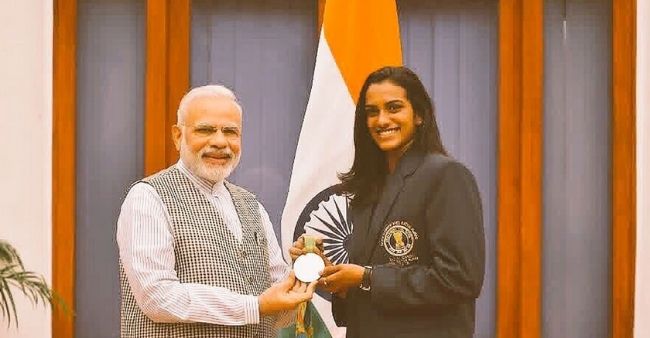 As we know that there are Tokyo Olympics taking place from 23rd July to 8th August 2021 and many Athlete from India are participating in different Olympic games. Recently PM Modi chaired a conference with all the athletes taking part in Tokyo Olympics. During the conference people went gaga when he showed his sweet gestures with players but one thing that went viral was the talk with PV Sindhu who has bee constant with the Olympics and all other events taken place and for representing India every time.

PV Sindhu is the biggest hope for India’s biggest medal this year. So now what has caught eyes with the gesture of PM with Sindhu is he asked Sindhu for her liking towards an Ice-Cream.

Being an athlete requires a rigorous schedule and hardwork. I asked @Pvsindhu1 about her love for ice-cream and also interacted with her parents. pic.twitter.com/Hlapc8VJhp

PV Sindhu expressed her feelings when she was interviewed by ANI news portal asking about how she felt talking to PM, she said, “It was an honour and an absolute pleasure speaking to our PM Narendra Modi with the rest of the Indian contingent. I would like to thank him and the entire nation for the continuous support, and we hope to make you proud at the Olympics”.

Only slim girls get work in industry: Shehnaaz Gill on her weight loss journey...

Hina Khan flaunts her well toned abs in a tight-fitted crop top, with a message on her top...

Shilpa Shetty adds a bhangra twist to her workout, shares a fun video...

Samantha Akkineni and Naga Chaitanya give us glimpse of their intense workout session...