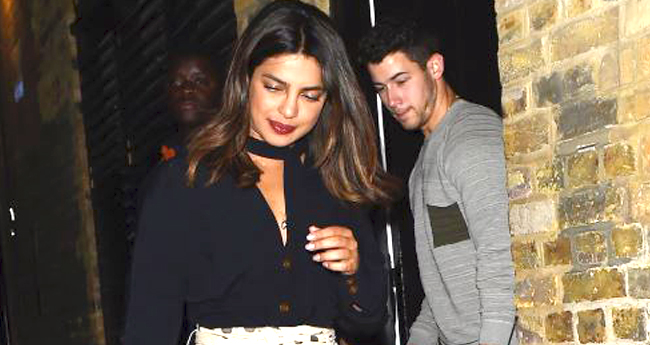 Today, Indian and international star Priyanka Chopra has turned 36 years young. And, it is obvious that she will kick start her another glorious year with beau Nick Jonas. Last night, Peecee along with Nick Jonas were seen coming out of a restaurant in London.

Even, the report says, Nick’s brother Joe and Kelvin were also with them. Later, Sophie Turner also joined the group. Priyanka’s bonding with the Jonas family seen very well and that is the reason she often hangs out with his brother and fiance.

Check out the pictures of Priyanka Chopra here:

The ultra stylish diva of the industry:

We got to know about PeeCee’s next visit to India, and regarding that, a source revealed, “Priyanka will fly down here again in the second week of July to start the shoot for ‘Bharat’. Nick is trying to wrap up his other work commitments as early as possible to be with his ladylove. PC is expected to shoot till mid-September, so, in between, the ‘Anywhere’ singer is expected to pay her a visit.”

Earlier, when she along with Nick came to India to meet Priyanka’s family, her sister Parineeti said, “I have not met my sister for months because she has been in America for the longest time. And whenever she traveled to Bombay, it was for a day or two. I wasn’t in Bombay either at that time. So this time when she came, I literally ran to her because I have not met her for months. It was a great catch up time. It was like a family trip and there were friends with us too. So it was a friend and a family trip actually. It was short and sweet. I was there for like 24 hours and I had a great time. It was a great trip.”