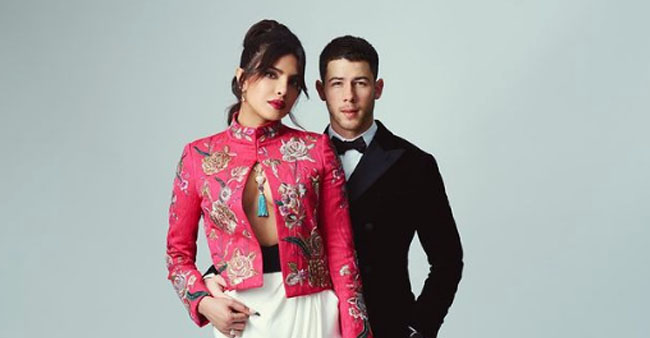 In the recently concluded BAFTA Awards, global icon Priyanka Chopra Jonas and her husband Nick Jonas were slaying on the red carpet. The prestigious award show was held in London following all the health safety protocols owing to the ongoing crisis.

Needless to say, Priyanka and Nick made heads turn as they walked down the red carpet in full swag. The Barfi movie actress who is known for giving away major fashion goals wore a stunning ensemble while her husband sported a black tuxedo.

Speaking of Priyanka’s outfit for the BAFTA awards, she wore an embellished jacket with an open front and paired it with silky white trousers from the shelves of Pertegaz and black pumps by Christian Louboutin. For her accessories, she kept it minimal and added a pop of contrast with a beaded turquoise pendant, a pair of sparkling earrings, and a few finger rings. Mrs. Chopra looked stunning in her red carpet look.

On the other hand, Nick Jonas’ tuxedo was from the studios of Giorgio Armani and he complimented his wife while walking on the red carpet of the prestigious BAFTA award.

The official page of the BAFTA awards shared the couple’s look on Twitter with the caption, “Love is in the air at the EEBAFTAs as Priyanka Chopra and Nick Jonas arrive. Priyanka will be presenting an award later tonight (sic).”

❤️ is in the air at the #EEBAFTAs as @priyankachopra and @NickJonas arrive! Priyanka will be presenting an award later tonight. pic.twitter.com/IjZZEszaA4

Apart from BAFTA’s official Twitter handle, Priyanka Chopra also shared the picture on her Instagram handle. The pictures of her and Nick Jonas in their BAFTA awards red carpet look.

The caption alongside the oh-so-stylish picture reads, “Hot date Nick Jonas (sic).” She paired it with the hashtag BAFTAs.

Nick Jonas shared the video of them walking the red carpet on his Twitter handle alongside the caption, “Been a while since we were on one of these Priyanka Chopra (sic).”

Been a while since we were on one of these… @priyankachopra #bafta pic.twitter.com/mX4vzREFmk

It was re-tweeted Nick’s tweet and added a note, “Too long Nick Jonas (sic).”

A while back, the husband-wife duo announced the nominees for the prestigious Oscars. The lovebirds had fun doing so.

Indeed, Nick and Priyanka set the bar for couples’ goals a bit too high.

Published by siddhi ajgoankar on 12 Apr 2021