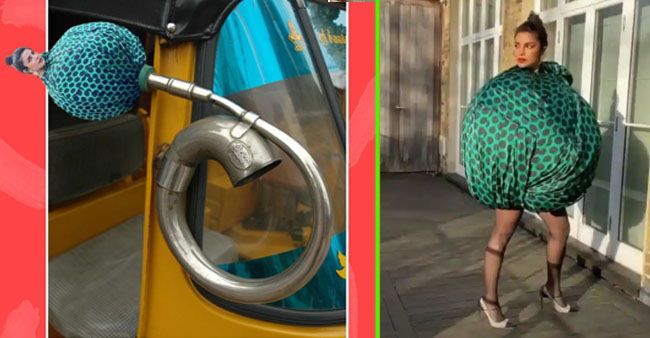 Global icon Priyanka Chopra Jonas recently added another feather to her hat after making a debut as an author. She is on cloud nine after the success of her memoir titled Unfinished. The actress who has made her name in the entertainment industry because of her acting and singing proves is also known for style statements. However, PeeCee’s recent fashion statement has become a viral meme.

The former Miss World can’t control her laughter as the memes about her dress are making rounds on social media. Priyanka shared several viral memes which make fun of her quirky look in a ball-shaped outfit.

Taking to her verified Twitter handle, Priyanka Chopra shared these series of memes. Alongside the memes, she wrote, “Too funny… Thanks for making my day guys.”

The memes show Priyanka Chopra as a blowhorn, then as new Pokemon which the memers have named Priyankemon, she has even been featured as a parachute.

In another meme, Virat Kohli can be seen playing with a Priyanka-shaped cricket ball on the field. One meme shows, PeeCee as a firecracker while the other shows her as a variety of pufferfish.

Among the funniest of memes is the one that says, “When mom says ‘boriya bistar’ samet aur nikal jaa yahan se.”

All these memes are going viral on various social media platforms and netizens are impressed by seeing Priyanka taking it on a lighter note.

On the work front, Priyanka Chopra Jonas recently starred in the Netflix movie The White Tiger. In the movie, she shared the screen space with versatile Bollywood actor Rajkummar Rao.

The movie is receiving praises from all across the globe. Everyone is lauding the performances of Rajkummar and Priyanka. They are now wanting to see this on-screen pair work together more often.

On her Instagram handle, Priyanka even shared a thank you note, expressing her gratitude towards fans for making the movie trend on the streaming giant.

Published by siddhi ajgoankar on 24 Feb 2021