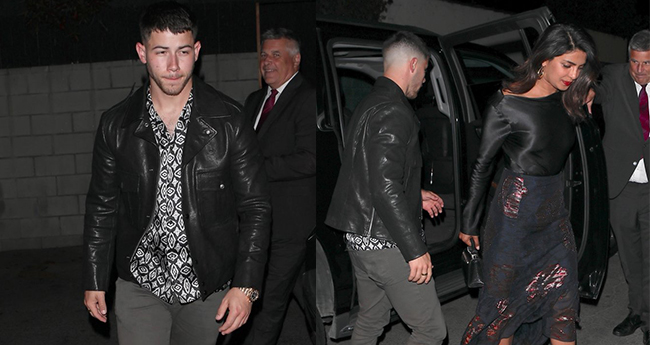 Actress Priyanka Chopra who already set the red carpet on fire at Met Gala is all in news for her link up with pop singer Nick Jonas. As they both have not yet confirmed bout their relationship status, these two international celebrities were spotted spending time together for the third time. Nick and Priyanka attended the Met Gala last year which was their first public appearance. They both teamed up wearing Ralph Lauren and Priyanka also said it was fun as they decided to go together at the event.

News of their link up is getting viral since both of them were captured spending weekend together. Priyanka and Nick Jonas attended the ‘Beauty and The Beast’ live concert which was followed by Los Angeles Dodgers game. The rumored couple also went on a yacht ride with their friends.

Talking about their third date ‘PeeCee’ and ‘Nick’ went for dinner together at Toca Madera restaurant in West Hollywood. They also spent some cozy moment together at the corner table. According to a source “The pair were very affectionate with one another, with Priyanka running her hands through his hair as they cozied up together at their corner table in the garden patio. They were cute and seemed to be enjoying each other’s company, laughing and smiling.”

@nickjonas and @priyankachopra were spotted Thursday night grabbing dinner in West Hollywood! A source said “they were very affectionate with each other and seemed to not care who saw. Priyanka ran her hands through his hair at one point and they were laughing and even dancing to the music.” No confirmed relationship status has been shared but who cares, as long as they are happy is all that matters! #nickjonas #priyankachopra #losangeles

Priyanka Chopra who is a renowned actress in Indian film industry entered Hollywood with her TV series ‘Quantico’. Her character ‘Alex Parrish’ was accepted by the American audience and she then worked in some movies. Her link up with Nick Jonas is also a shocking news for Indian fans. Some are still not believing this news. What do you say about this rumored couple?