Priyanka Is Off To US To Be With Nick, The Couple Likely To Attend A Wedding In Itlay 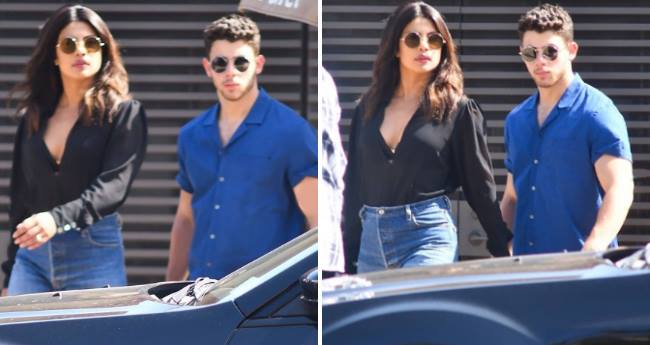 Priyanka Chopra and Nick Jonas made their relationship official last week after having a Roka ceremony followed by a grand post engagement bash in Mumbai which was a star-studded affair. The couple then got busy with their respective work commitments post the celebrations.

Nick flew down to his hometown and Priyanka started shooting for her comeback Bollywood film. And now after finishing the first schedule of The Sky Is Pink and spending some quality time together, the actress has left for the US to be with her beau Nick.

Well, according to many reports, these two love birds are engaged! TBH I want to see the ring😭, however congrats to them #priyankachopra #priyankaandnick #nickjonas

Priyanka and Nick were spotted spending quality time at Malibu as they enjoyed the Sunday brunch. While PeeCee rocked in her bell-bottom denims and a sheer black shirt, Nick too looked handsome in a blue shirt and pants. The couple was seen walking hand-in-hand.

Take a look at the pictures here:

Well, its not just that Priyanka headed to the US to spend time with Nick but there’s one more reason for PeeCee’s trip to the US.

As per the media reports, Priyanka and Nick are reportedly set to attend a wedding in Italy.

A source revealed, “Priyanka completed the first schedule of Shonali Bose’s The Sky is Pink with Farhan Akhtar and Zaira Wasim earlier last week and will now only join them again towards the end of September. She had stayed back to complete some prior commitments and spend time with her family before heading to the US, a trip that was planned well in advance. During the month-long trip, the actress will also be attending a wedding in Italy with Nick, the bride reportedly being the daughter of a corporate bigwig.”

These two are prepping for their much talked about engagement party in #Mumbai ! 🤩😍😘stay tuned for more! #priyankachopra #nickjonas #priyankaandnick #priyankaengagement

Well, now we are so waiting to see the couple making more and more appearances together publicly.

Talking about Priyanka and Nick’s wedding which is reportedly taking place in October in Hawaii, however, nothing has been confirmed yet. Priyanka and Nick got engaged on the actress’ 36th birthday in London. Since then, the couple has been a major talk of the town.