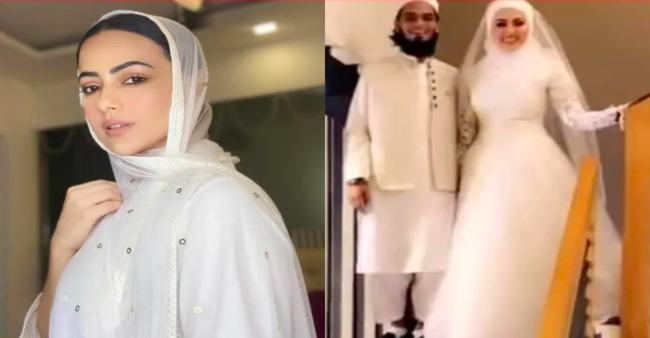 Actress Sana Khan is among a well-known face of Bollywood and a few weeks ago, she surprised everyone when she announced that she is quitting the B-town. She featured in many popular movies and TV shows including Bigg Boss. The actress recently took to her social media account and shared she has tied the knot with Gujarat-based Mufti Anaas.

Sana Khan and Mufti Anaas opted for a low-key wedding function and video from their marriage ceremony is getting popular on social media. The beautiful couple could be seen walking down the stairs holding each other’s hand. Have a look at the video below:

The couple opted for white wedding attire and both are definitely giving us major relationship goals. In video, we can hear guests congratulating the newly-weded couple and Sana could be seen responding to them with her beautiful smile. Later in the video, the couple could be seen cutting their wedding cake in the presence of heir dear ones.

Earlier, Sana had declared on social media that she has decided to quit the Bollywood industry and she wishes to spend her life serving humanity and following the orders of her ‘creator’. It was October 8 when she decided to share this update and all of her fans supported her decision. Have a look at her post below:

While sharing the post, she wrote— ‘My happiest moment. May Allah help me and guide me in this journey. Aap sab mujhe dua Mai Shamil rakhe.’

Talking about her work front, she has been a part of many movies including Jai Ho and Wajah Tum Ho. Apart from Bigg Boss 6, she also participated in Jhalak Dikhhla Jaa 7 and Kitchen Champion.