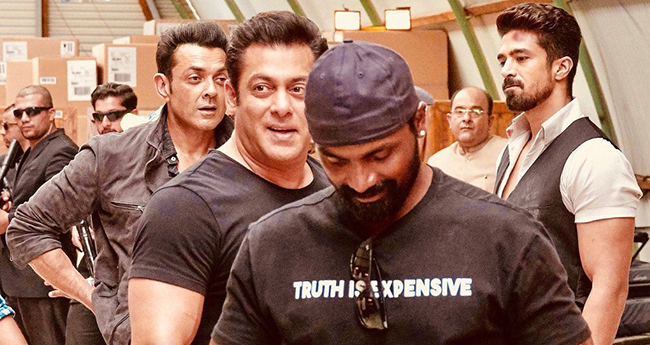 The entire cast and crew of Race 3, which is slated to release for this Eid are busy promoting the movie to the crowds. They are trying their best to take the movie into the audience by participating in various promotional events. The latest buzz surrounding the director and actor of the film is that they are set to work together in their next project as well. Yes, you heard it right. The director-actor duo will be next seen in a dance-based film according to Remo D’Souza.

It is heard that Remo has approached Salman for this dance film first, but however, it got pushed back and Race 3 came into the track. Talking to a leading daily, Remo said that he considered Salman as the main lead of his dance film because he wanted a great actor to do it who is also good at shaking his leg.

Race 3 is the third part of the Race series. The first two parts star Saif Ali Khan in the lead role. This is the first time in which there is a collaboration between Remo and Salman. Remo has previously choreographed Salman in the Bajrangi Bhaijaan song Selfie Le Le Re. It is the first time that this choreographer turned director is directing Salman in a movie. The duo will collaborate for the second consecutive time for the yet to be titled dance film. In an interview with a leading daily, Remo confirmed the big news of his second-time collaboration with Salman for his next.

Remo to direct Salman in a dance film

Remo was quoted saying,“It’s a beautiful script. For it, I wanted someone who is a great actor but at the same time can pull off dance steps as well. That’s why I cast him. It had to happen before Race 3 but because of Race we pushed that film later and we will do it after as we are busy promoting the Race.”

Responding to the same, Salman said that he was not ready to do a dance film when Remo came to him.  Salman was quoted saying,“We were supposed to a dance film together first but then I was not prepared for it. But I keep training for it. When I prepare for it, first my knees go, then my shoulders go and then back. So I am taking my time to do this film. In between, Ramesh Ji came up with Race. Remo and I loved it and decided that dancing will take time, so let’s do Race first.”