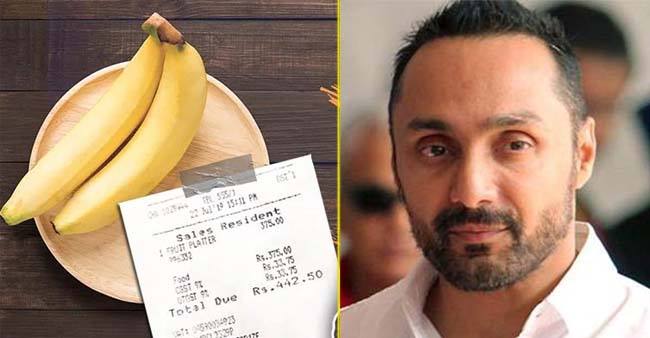 Recently Rahul Bose had to pay Rs 442 for 2 bananas at JW Marriott hotel in Chandigarh and the actor reacted to it by sharing it on Twitter. The post went viral and people from different parts of the world started responding to it. After Rahul Bose’s banana incident, a lot of brands have taken it up on Twitter to share their creative trolls related to the incident.

Here, we will have a look at some of the creative memes that has been made by big brands.

They came with a creative in which the image has 2 bananas on one side and on the other side, there is list of features that Amazon Prime Video offers. They make fun of the incident saying that you can get all those features at just Rs 442.

In their funny image, it has been mentioned that PVR group has send a friend request to JW Marriott after finding out that they sell 2 bananas for Rs 442.

Natures Basket makes fun by saying that you will get bananas at the most lowest price from them..

Policy Bazaar has requested everyone to protect their family from financial insecurity for the price of just two bananas, which is Rs 442.

Protect your family from financial insecurity after you at the cost of 2 bananas and protect them from the lemons that life might give them. 😄 #RahulBoseMoment #RahulBose pic.twitter.com/OszdmEuSPH

They have asked users to buy bananas from them as it would not cost too much.

StarQuik tweeted that you will not face any #MyRahulBoseMoment with them as all the fruits and vegetables provided by them are affordable.

People maybe #GoingBananas over the cost of bananas, but the price of bananas at the Reliance SMART superstore will make you go ga ga. Visit today! #SMARTgiri #RahulBoseMoment pic.twitter.com/UxhumsymZY

Anchor by Panasonic states that their insulation tape will protect you from all type of shocks such as #RahulBoseMoment.

There were also many other interesting messages and memes that came out of the incident. One user was saying that you can book an OYO room at Rs 442.