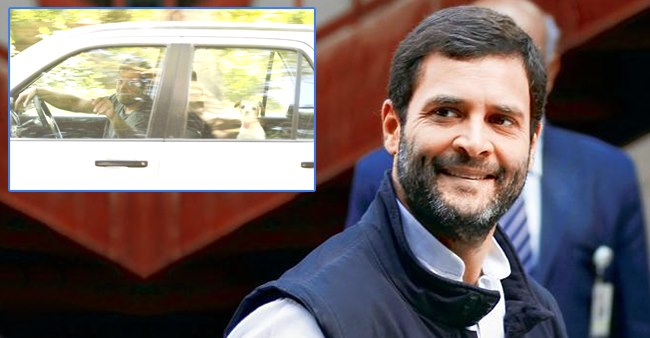 After a massive defeat in the Lok Sabha Elections, Rahul Gandhi has been keeping himself away from the public eye. What’s cruel is that his rejection as the president of Indian National Congress has also been rejected and asked to continue for the next  three to four months. But, this doesn’t stop him from taking his dog, Pidi on a ride. After a rough phase in the Lok Sabha Elections, Rahul Gandhi was snapped in his car with his pet dog Pidi and Twitter is absolutely in love with this moment.

The picture was shared by one of the Twitter users named @anilsharma07 along with the caption, “Congress @INCIndiaLive president @RahulGandhi in New Delhi on Tuesday.”

How lovely pix : and there’s pidi too

Such a lovely picture 😍

In the picture, Rahul can be seen in a car outside his home in 12, Tughlak Lane, New Delhi. His dog, Pidi was seen sitting at the backseat of his car and gave an adorable reaction. Well, the picture is a proof of a famous saying that a dog is man’s best friend. The picture has already garnered the attention of people on Twitter. They are actually loving this duo and have showered praise on the Congress president.

After the picture went viral, users started to comment. One of the users wrote, “Beautifully captured, great timing and ofcourse you’ve got eagle eyes.” Whereas, another user wrote, “What a lovely picture.. @RahulGandhi #MyPrimeMinister one day.. Inshallah.”

We remember how Sachin pilot on being denied CM Raj kicked his dog when it came to welcome him .
I was just curious to know the mood of Pidi the dog
We care for dog too aur aap kah rahi hum nafrat phalai rahe hai

What a lovely picture.. @RahulGandhi #MyPrimeMinister one day.. Inshallah. 🙏👌❤

Rahul Gandhi introduced Pidi in 2017 with a hilarious video. He wrote, “Ppl been asking who tweets for this guy..I’m coming clean..it’s me..Pidi..I’m way (cooler) than him. Look what I can do with a tweet..oops..treat!”