On Raj Thackeray’s Birthday, Petrol prices slip down by Rs 4 to Rs 9 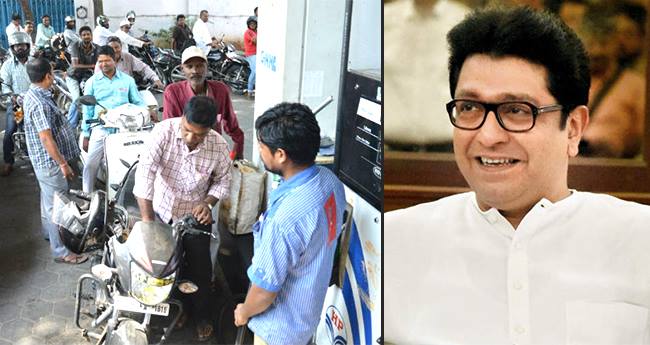 The citizens of India are currently angered by the constant hike in fuel prices every now and then. People who were waiting for ‘Ache Din’ have lost all hopes. However, in Maharashtra, the Maharashtra Navnirman Sena (MNS) decided to give relief to people by offering petrol at a discounted price on the 50th birthday of party president Raj Thackeray (June 14).

MNS leader Sandeep Deshpande said, “As a token, we will make petrol available at Rs 4 less than the market rate on June 14 for Mumbaikars.”

The petrol price in the state was Rs 84.26 on Thursday.

An MNS worker told ANI, “The waiver is being offered since 8 am in the morning and will continue till afternoon. Two-wheeler owners will be paying Rs 4-5 less at selected petrol stations in Maharashtra.”

He further said, “In Mumbai’s Shivadi Assemby Constituency, we are giving a relief of Rs 9 per litre on petrol.”

On @RajThackeray ‘s b’day his followers decided to give Rs 9 discount on Petrol and look what has happened. A sea of bikers at one of Mumbai’s petrol pump. pic.twitter.com/AhbSAGReHh

People are filling their tanks to full capacity since petrol is offered at discounted price.

A few days back Sandeep Deshpande had said, “This facility will be available at select 36 petrol pumps across the city and the list of pumps will be announced on June 8. Any two-wheeler can fill up as desired at these pumps. Partymen will be there to maintain records and at the end of the day, MNS will pay petrol pump owners the difference in amount. Petrol pump owners will support us, they will not suffer losses from our initiative.” “If we can do it, why not the state government,” he asked.

Thackeray had criticized PM Modi and his government for the hike in fuel prices.

Why is the second wave of Covid-19 affecting young people more? The Director General of the ICMR explains...

Delhi Airport Terminal 2 to be temporarily closed from May 17 due to lack of travelers...