Ranbir Kapoor inspires us for fitness as he rides his bicycle on the streets with his friends, see pics 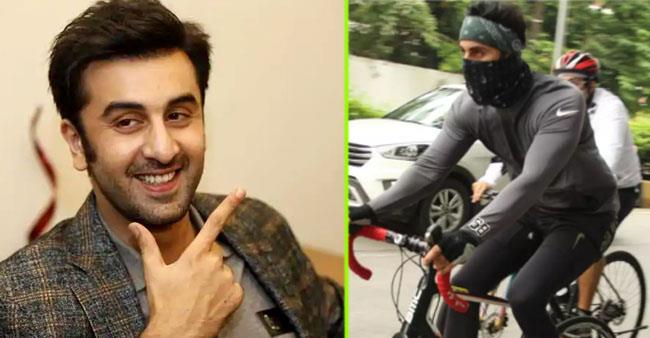 Ranbir Kapoor is among the most talented actors of Bollywood and not just acting, he is involved in many other things. He loves outdoor games and activities and he is often seen with his friends enjoying his fitness activities. Apart from football, Ranbir is in complete love with cycling as it keeps him fit all the time. Whenever he gets time, he takes his bicycle on a spin on the streets of Mumbai. He was recently spotted with a few of his friends and he is definitely giving us major fitness goals.

As the gyms are not fully opened due to the outbreak, this star hs found this amazing idea of keeping himself in shape. Recently, he was spotted enjoying a bicycle ride with his friends and the pictures are simply unmissable. Check out some of the photographs below:

Ranbir Kapoor is looking dapper in his grey and black fitness dress up. He could be seen wearing a long mask to ensure safety amid the outbreak. Recently, Ranbir and Alia created a lot of headlines as she gifted him a swanky bicycle wroth 1.5 lakh and fans just can’t keep calm about that. Ranbir also spotted a few times riding that special bicycle. If you haven’t seen his new bicycle yet, check it out below:

There are many rumors going around social media that Ranbir and Alia are all set to tie the knot next year. They were supposed to get married this year in December, but due to the lockdown and work commitment, they are planning their marriage next year. On the work front, Ranbir and Alia will be next seen in Ayan Mukherjee’s Brahmastra co-starring Amitabh Bachchan and Mouni Roy.

Along with this, Alia has also resumed the work for Sanjay Leela Bhansali’s Gangubai Kathiawadi and this movie will arrive on the big screens next year.