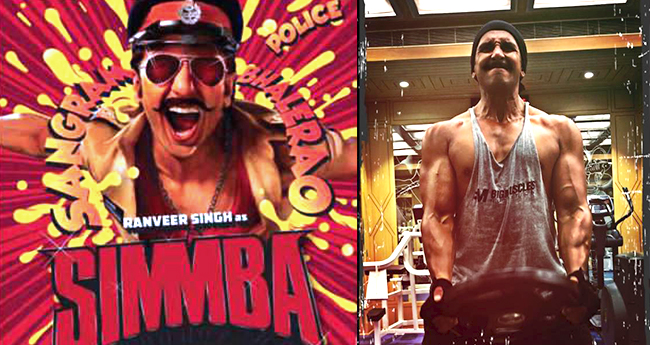 When everyone is talking and praising Ranbir Kapoor for delivering an excellent work in his recent release ‘Sanju’ which is a biopic of Bollywood star Sanjay Dutt, we have a picture of Ranveer Singh to kill your Monday blues.

In the picture, Ranveer is seen doing an intense workout amidst the shooting of Rohit Shetty directorial Simmba. Currently, the actor is shooting for Simmba in Hyderabad and as the film is the first venture of Ranveer and Rohit, he is making sure to give his cent percent. The Padmaavat actor irrespective of his tight schedule is working hard in the gym.

Check out the picture here: In the film Simmba, Ranveer will be seen in the role of a cop named Sangram Bhalerao. This will be newcomer Sara Ali Khan’s second film after Kedarnath. Simba will hit the theatres on December 28, 2018. On the other hand, the actor has already completed the shooting of Gully Boys in which he is paired opposite Alia Bhatt. Gully Boys is Zoya Akhtar’s directorial project in which Ranveer will be seen playing the role of a street rapper. The film is slated to release on February 14, 2019.

Ecstatic!!! An early birthday present from The Boss! Quite easily the sexiest watch I’ve ever had! Thank you Sir! 😍❤🙏🏽 #whataguy @itsrohitshetty

As the actor is following the tough workout schedule to be perfect for the role, he said “Rohit sir had told me [about the physique] a long time back and was clear about the kind of body he wished for me to have. So, now it’s time to put the blinkers on, put my head down, work hard, and acquire the body that he wants.”

After completing the shooting of Simba, the actor will indulge in the shooting for Kabir Khan’s directorial film 83 which is a biopic of Kapil Dev and it will show India’s win at World Cup in 1983. Also, if rumors are believed to be true then Ranveer will be seen in Maneesh Sharma’s film which will be a musical film like La La Land.