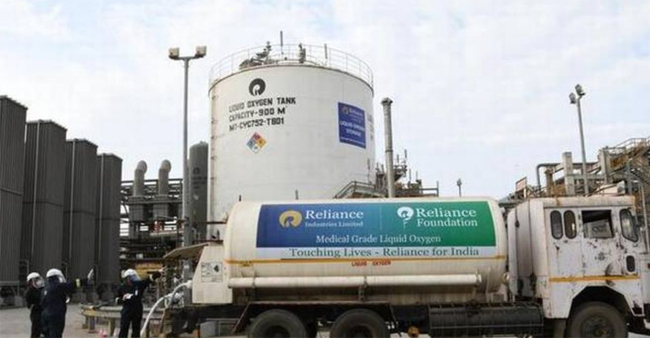 As the cases have been surging during the second wave of COVID-19 in the country, Reliance Industries (RIL) has raised its production of medical oxygen to 1,000 metric tons per day, making it India’s largest producer of medical-grade liquid oxygen.

RIL has now been producing 11% of the country’s oxygen demand, as it has increased its production from bare minimum to 1,000 tons per day. It is doing so to meet the daily oxygen limit of over 1 lakh people.

The company’s statement read, “RIL ramps up production of medical-grade liquid oxygen from near 0 to 1,000 mt per day free of charge. (Producing) 1,000 mt of oxygen to meet the needs of over 1 lakh people every day on an average.”

Notably, Mukesh Ambani, Chairman of RIL, has been personally supervising the scaled up production and transportation at Jamnagar, Gujarat.

Last months, the company had produced 15,000 mt of oxygen, which helped around 15 lakh people. It has also airlifted 24 ISO containers for transporting Oxygen from Germany, Belgium, Netherlands, Saudi Arabia, and Thailand.

Image via: constructionweekonline (above used images is only for representational purpose only).

Exercises to help you regain power after being infected with Covid-19...

CSK contingent members tested positive for COVID-19; none of them players...