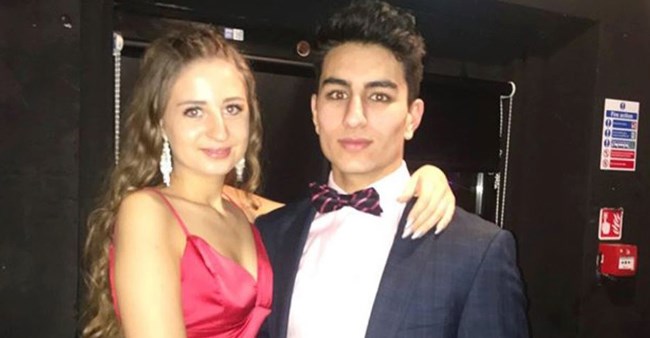 Ibrahim Ali Khan, son of Saif Ali Khan, is an internet sensation. Although he has not made his Bollywood debut yet. He shares good bonds with people around him. Whether they are his friends from university or his family, he loves them all. Ibrahim is only 19 year old but knows how to maintain his relations. He also likes to update his social media profile, thus updates his fans about his whereabouts. Recently, the Prince of Pataudi took to his Instagram account and shared a story that has raised many eyebrows regarding his love life.

In the Instagram story, the picture shared by Ibrahim was with a pretty woman. He was posing in the picture looking dapper in his blue tee and a pair of blue jeans whereas the pretty woman was seen wearing a black pair of jeans and a plain white top. The name of the lady is Lottie Stevens. They were in an aquarium, posing in front of a massive fish tank. It was not the picture that caught our attention, but the caption. The caption said, “I miss you,” a sad puppy gif and a sticker that read, “Feeling homesick.”

It is quite clear that this pretty girl is a very special person in Ibrahim’s life. It is not necessary that they are boyfriend or girlfriend, they could be just very good friends also.  The fuel was added to the fire when a similar post was posted by Lottie on her Instagram profile. The picture was not the same but both of them were looking quite stunning.

Just me and the boys 🥰

In the recent past, Ibrahim was in the news for a caption he wrote for his father with a picture. The caption was, “Me and the old man.” Saif in an interview with Mumbai Mirror said, “Yeah, it was quite funny. Being older doesn’t bother me and the fact is that I’m Ibrahim’s old man. But I’m keen to be fit and look my best. I’m not going to be looking like an old man for a while, but I understand the irony of it.”